Flowers Can Bloom In Outer Space, Too 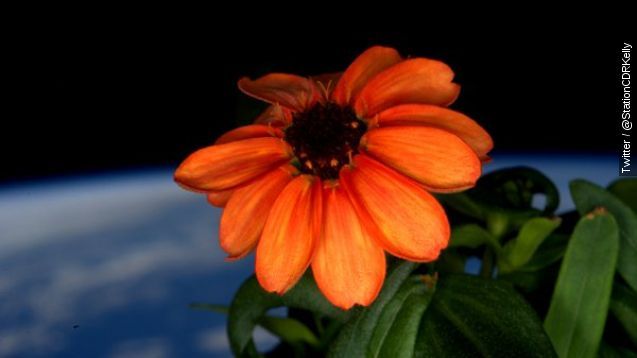 SMS
Flowers Can Bloom In Outer Space, Too

By Katie Link
January 18, 2016
The quest to grow produce in outer space continues. No word on if astronaut Scott Kelly plans to take a bite out of this flower.
SHOW TRANSCRIPT

Some people do it as a hobby, others do it in the name of science. We're talking about gardening, folks. (Video via NASA)

If you just saw a picture of this orange zinnia you might not believe it was grown in outer space. But thanks to some very special TLC from a couple of astronauts, this mission was accomplished.

NASA created the Veggie Plant Growth System on the International Space Station in 2014. The goal was to enable crew members to grow and eat their own fresh vegetables.

Last August, three astronauts did just that by sampling their own home-grown red romaine lettuce. Next up on the growing schedule: A batch of zinnia flowers.

But the flowering plant proved to be a bit harder to manage due to a longer growth duration and sensitivity to humidity. Luckily, main caregiver Scott Kelly kept his sense of humor throughout the nearly two-month-long process.