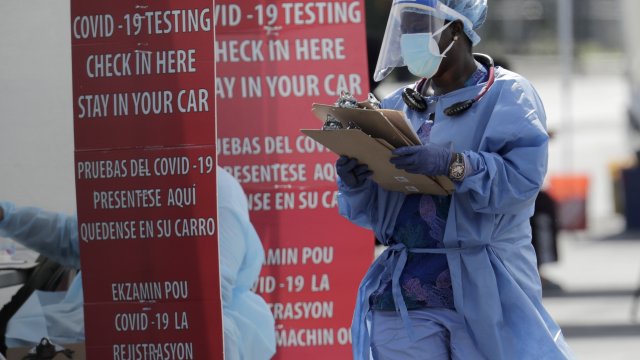 It was a tough weekend for Florida in its battle against the coronavirus. Officials announced that Florida set the record for the biggest single-day increase in COVID-19 cases of any state since the pandemic began.

Saturday's tally of more than 15,000 cases brought the state's total case number to nearly 270,000 for last week. Florida also reported a record number of 514 fatalities from the virus last week.

The state has doubled testing in the last month, but the percentage of people testing positive is growing. Doctors are predicting another rise in deaths in a couple weeks when those who are infected now get sicker.

On Sunday, the mayor of Miami-Dade County said its hospitals will soon reach capacity.

Mayor Carlos Gimenez told CNN: "It won't be long. Look, we have reached capacity in some, but we also have reserve space. And so, in our system, we have another 1,200 beds that we can crank out pretty fast for critical care beds. We have another 500 ICU beds that we can crank up. We have right now a capacity -- we have probably about 1,500 vacant beds on our critical care. It's our ICU capacity that's causing us concern. But, again, like I said, we can crank up another 500."

Other states like California and Texas are reporting surges in case numbers, too. Positive tests, hospitalizations and deaths are rising in LA County, and Dallas County reported its deadliest week yet from the virus.

In a statement, Bottoms said, “Georgia reopened in a reckless manner and the people of our city and state are suffering the consequences.”

Adm. Brett Giroir, the Health and Human Services coronavirus testing chief, appeared on ABC and called on all Americans to wear masks.

Giroir said, “For this to work, we have to have like 90% of people wearing a mask in public in the hotspot areas. If we don’t have that, we will not get control of the virus.”

Experts say the country is better equipped to handle the current influx of patients than it was in the beginning of the outbreak. More than three million cases have been reported across the country since the pandemic began, and at least 134,000 people have died from the virus in the U.S.