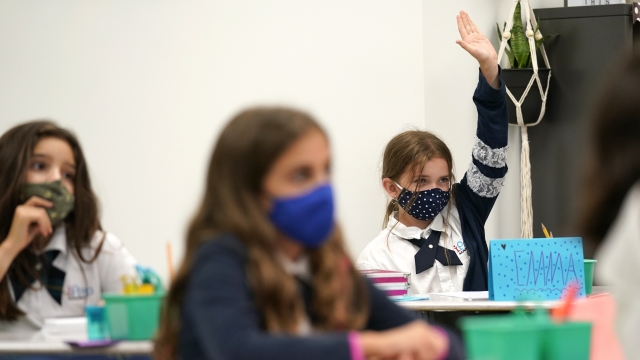 A judge in Leon County is hearing the case between pro-mask parents and elected officials who say the decision should be left up to parents.

Florida's power struggle over wearing masks in school to guard against coronavirus infections landed Monday before a judge considering a lawsuit that challenges Gov. Ron DeSantis' order reserving the mask decision for parents.

The three-day hearing before Leon County Circuit Judge John C. Cooper pits pro-mask parents against the Republican governor and state education officials who say parents, not schools, should choose whether their children cover up inside schools.

Some districts belatedly began requiring masks, as recommended by the U.S. Centers for Disease Control and Prevention after classroom exposures forced them to send thousands of students and hundreds of teachers and staff into isolation or quarantine.

It remains to be seen what repercussions districts face and what if any steps the U.S. Department of Education takes.

At least eight school districts representing more than 1 million Florida students were defying the governor's order as of Monday night. Duval County, which includes Jacksonville, became to latest district to adopt a stricter mask policy, which begins Sept. 7 and last for 90 days. State education officials have vowed to financially punish districts that don't comply, contending they are violating state law unless they allow parents to opt-out their children for any reason.

The mask issue has spurred heated debates at school board meetings, with one side claiming a ban on mandatory mask rules denies their children a safe education, and the other contending such requirements amount to government overreach — even tyranny.

Miami-Dade schools, the nation’s fourth-largest district with 340,000 students, began classes Monday with a strict mask mandate. Superintendent Alberto Carvalho said the district would wear any state punishment as a “badge of honor.”

The largest school district in Florida that hasn’t imposed a strict mask policy is Orange County, where parents and teachers protested Monday outside district headquarters demanding that Superintendent Barbara Jenkins and the board make masks mandatory.

Sarasota County implemented its new mandatory mask policy Monday. Masks were optional the first two weeks of classes, but outbreaks districtwide prompted the school board to impose a strict mandate. Only students who provide a doctor’s note will be excused, an opt-out mirrored by other districts with mask requirements.

The Florida school districts that mandated masks last year had positive cases at about the same rate as districts without mask requirements.