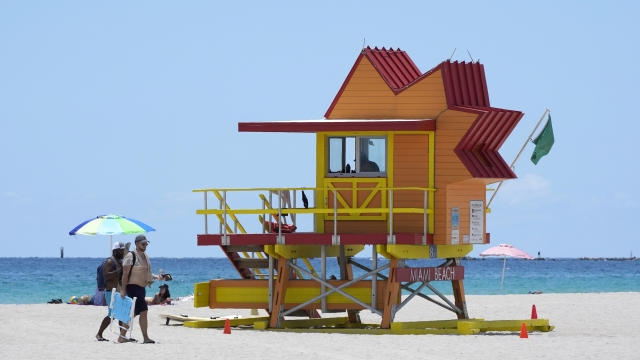 Lauren Magarino: "COVID-19 was one of six topics discussed at last night's presidential debate, and it came as Florida reported an increase in cases. Newsy's Katherine Biek joins us with more. Katherine, how large of an uptick is Florida seeing and what's likely behind it?"

Katherine Biek: "Well, Florida's new case numbers more than quadrupled from Monday to Tuesday, Lauren. The state reported 3,266 new cases yesterday after reporting just 738 a day earlier. Before this, Florida had actually been seeing some positive trends in cases. It was one of just a handful of U.S. states where cases had actually been falling. That's one of the reasons why Governor Ron DeSantis lifted restrictions on restaurants and other businesses late last week. He also ordered local governments to stop issuing fines to people for not wearing mandated face coverings. The governor's decision has been criticized, though, by national health experts like Dr Anthony Fauci. But that didn't stop large crowds from gathering over the weekend, which could be one contributing factor to the spike, Lauren."

Magarino: "Disney is laying off tens of thousands of theme park employees. Is there any idea how many from Walt Disney World in Orlando will be impacted because that's massive work there."

Biek: "It really is. Disney, though, did not specify how many of its Florida employees will be affected. In total, it's laying off at least 28,000 workers across its American theme park division. That's about 25% of its domestic resort work force, according to The New York Times. Almost two-thirds of the layoffs will be part-time employees. Walt Disney World in Orlando reopened in July. But the company has been seeing fewer crowds than expected, and Disneyland in California is currently closed because of COVID-19 restrictions on large gathering from the state. It's something Disney criticized in its announcement regarding the layoffs yesterday. But the pandemic has been hurting the company's operations worldwide. Disney most recently reported a third quarter loss of $3.5 billion in operating income due to its parks being closed around the globe because of the coronavirus, Lauren."

Magarino: "I mean, it's such a massive figure and you would think, Oh, what a shock. But honestly, I mean at this point these closures you, you would expect something as massive as that to come their way. Newsy's Katherine Biek. Thank you."