Some Floridians Are Waiting Over A Month For Unemployment Benefits 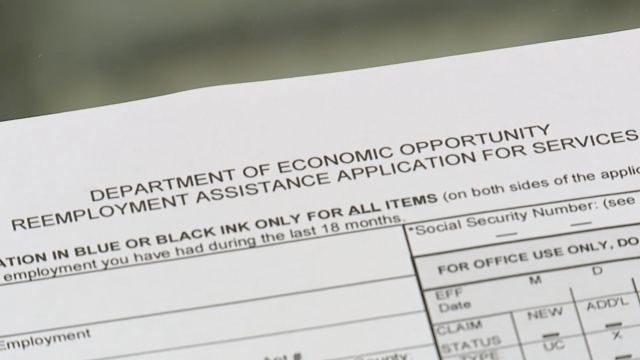 It’s been over 45 days since Florida photographer Michael Freas filed for unemployment. He's spent 45 days trying to log on, trying to follow the rules, and hoping for an answer to his most pressing question: When will I get paid?

"Because there was zero support. You could not find out anything. ... There's really no clear-cut guidance that you're getting from the DEO," said Freas.

The DEO is Florida’s Department of Economic Opportunity — the agency responsible for processing unemployment claims. But the DEO has been overwhelmed by the number of people applying for benefits.

Since March 15, over 960,000 people in Florida have filed for unemployment, but less than half have been paid. And the delayed payments appear to impact the self-employed and independent contractors the most.

"Time is of the essence, and they're taking too much of it," said Freas.

Freas is growing increasingly frustrated with a system that was never designed for this.

Normally, independent contractors, the self-employed and gig workers don't qualify for unemployment benefits in Florida. The CARES Act made them eligible. But to get access to those federally approved benefits, people must first apply for state unemployment, be deemed ineligible, and then apply for the federal Pandemic Unemployment Assistance.

The DEO says it's working as fast as it can to process pending applications and get payments out to those in need.

"Our metrics are improving every day, particularly if you look at the dashboard. We're going to catch up. Just be patient. We're taking this off in bite-size chunks. We're making progress every day," said Jonathan Satter, Secretary of the Florida Department of Management Services.

Freas says he just wants a clear answer on when his assistance will reach his bank account.

"Everything that they've told you is enough little glimmer of hope to get you another couple days further, and then you get to that day where it's supposed to happen and there's more disappointment," said Freas.