Florida Mom Kicked Out Of Doctor's Office For Breastfeeding 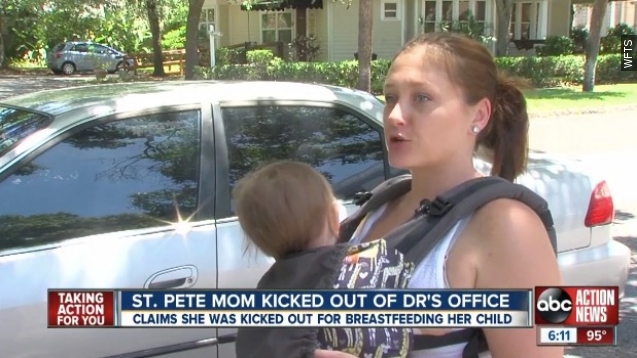 "She just told me right away that I needed to leave and reschedule my appointment," Nichole Moore told WFTS.

That was Florida mother Nichole Moore who was kicked out of a psychiatrist's office after she began breastfeeding her 8-month-old child during her appointment on June 11.

Our partners at WFTS report Moore brought her daughter, Emma, with her to the appointment because she was unable to find a babysitter. Moore, who's been struggling with postpartum depression, had also been waiting two months to get in with this doctor.

Emma ended up waking up during Moore's appointment and wanted to be fed.

"So I just asked Dr. Simko if I could — if he minded if I nursed her. And he told me yes," Moore said.

Moore told the SaintPetersBlog her psychiatrist, Dr. Mark Simko, had told her he didn't want her to breastfeed Emma because a female needed to be in the room with her and that it would distract Moore from the appointment.

A receptionist ended up asking Moore to leave before she finished nursing.

Florida law allows mothers to breastfeed "in any location, public or private, where the mother is otherwise authorized to be." Currently, 49 out of 50 states allow mothers to nurse in public.  (Video via BabyCenter)

The healthcare system Dr. Simko is with told WFTS, "their facilities encourage breastfeeding and they try to accommodate all patients but there are sensitivities in therapeutic settings."

Dr. Simko himself has yet to make any comment. Moore told WFTS she'd like an apology for what happened.