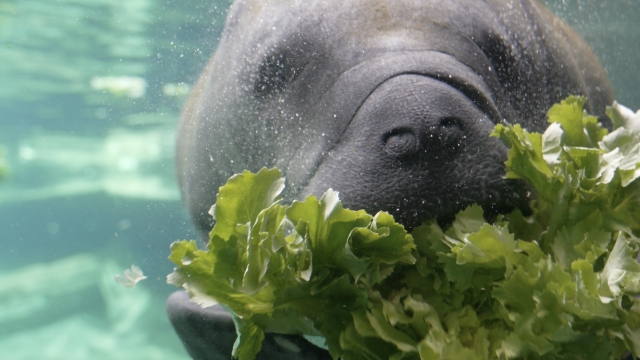 SMS
Manatee Deaths In Florida Expected To Reach At Least 1,000 This Year
By Haley Bull
By Haley Bull
October 25, 2021
The Center for Biological Diversity intends to sue the U.S. Fish and Wildlife Service, alleging it failed to revise the manatees' critical habitat.
SHOW TRANSCRIPT

Manatees are a Florida icon. But now there are grave concerns about their fate this winter after an unprecedented number of deaths this year.

The count is expected to hit 1,000 — already it's nearly double the five-year average as experts prepare for the worst. It's the most deaths for the mammal in Florida in decades.

The research assistant tracks manatees following their rescue and release. On this August morning on a lake in the Ocala National Forest, she's looking for Greedy B.

"To see how she's using the Ocklawaha River so we can determine how many manatees are using and what they're finding out here," she said.

The good news: It seemed like Greedy was eating and even found friends. But the concern is what lies ahead.

"I'm really concerned about this next winter. I think a lot of the food sources for the animals haven't had a chance to grow back," said Bartlett.

The deaths going back to last winter are considered an "unusual mortality event." A large focus is on the state's east coast, in the Indian River Lagoon.

"Our oceans and coastal ecosystems are facing a number of grand challenges to their continued vitality, and I think a huge red light warning sign is the death of all these manatees," said Dr. Michael Crosby, the president and CEO of Mote Marine Laboratory and Aquarium.

A factor behind the deaths may be a loss of food: seagrass. Scientists explain that ties back to water quality. Algal blooms in the area have led to less water clarity and light, which led to significantly less seagrass, which manatees feed on. Video from the St. Johns River Water Management District shows the contrast of the supply in 2010 versus this summer.

"The seagrasses have not rebounded at this point. It's going to take a few years of good water quality before they'll bounce back," said Chuck Jacoby, the district's supervising environmental scientist in the estuary section.

It's not an issue limited to Florida's east coast.

"It's a global problem and it's a continued problem in the United States, but not as bad as it used to be, and Florida has a much better history in the last 20 years of seagrass loss — but we're still seeing losses," said Jim Fourqurean, a distinguished professor at Florida International University.

He explained seagrass isn't just food for animals. It helps clean the water and can stop sediment from moving around.

"That means they provide storm protection and protection against storm surge for the human-built environment," he said. "These are the most valuable systems on Earth."

"We found as long as we provide some protection to the new plants, which was basically like cages or screen, we got pretty good growth where there was no seagrass," Hanisak said.

But the recovery will take longer. That means when manatees come back to warmer Florida waters in the winter, the problem remains.

"So yes we are preparing for the worst," said Martine de Wit, a veterinarian with the Florida Fish and Wildlife Conservation Commission.

FWC said it's reviewing all options to support them. De Wit said that includes conversations about feeding.

"It's not just about manatees. What happens when you introduce, for example, lettuce in this ecosystem that's already facing issues with imbalance and nutrients?"

FWC is also preparing for any rescues needed.

"First of all it's that space in the rehabilitation facilities, which is always critical, lots of talks on how to handle that. Our response for carcasses, if we get that again — how do we handle that? How do we get the bodies out? How do we continue our health investigations to document that it is still primary starvation or whether we are seeing other causes to their death now?" de Wit explained.

A network of organizations are part of the preparation.

That includes ZooTampa, which offers critical care to manatees and calves.

"We're looking at our capacity, what our pools can hold, what our filtration can do to make sure we can help in every way we can. We know that we're going to have to take on more manatees this winter," said Tiffany Burns, the director of conservation, research and behavior.

ZooTampa is nursing more manatees back to health, including orphaned calves, than they typically see. Burns said it's not clear what's behind the increase in calves, which require round-the-clock care and feedings, but they are preparing for the winter.

"I mean we would do anything that we needed to save these animals," said Burns.

To create more space, Clearwater Marine Aquarium is transforming a facility to try to increase capacity to take care of manatees.

"When manatees end up dying it's not like the canary in the coal mine, because the manatees are already dead because the seagrasses have died, the fish, the critters the shrimp everything that's dependent on that healthy system is no longer there, so it's going to take years to recover," said Dr. James 'Buddy' Powell, the executive director the Clearwater Marine Aquarium.

Conservation organizations are also ready to go to court. The Center for Biological Diversity filed a notice of their intent to sue the U.S. Fish and Wildlife Service, alleging the agency failed to revise the manatees critical habitat.

"I think there was too much neglect that occurred over many years of time where there were warnings given to the agencies. We think, though, that this is a wakeup call. We believe they are prepared to do more, but we are going to have to stay right on top of this issue and we hope suing would be the last resort," said Patrick Rose, the executive director and aquatic biologist with the Save the Manatee Club.

A spokesperson for the U.S. Fish and Wildlife Service said in a statement: "The Service is aware of and appreciates the concerns raised by the state and congressional members. We have initiated a five-year status review of the manatee that includes reviewing and considering the best available scientific and commercial data. We will use information in that analysis to inform future management decisions and conservation actions for the species."

In 2017, manatees were reclassified from endangered to threatened. Now there's also a bipartisan effort underway to move the manatees back to "endangered."

"The biggest thing is it brings more visibility, more resources, ideally more dollars. It did have that status. I was upset when they downgraded it about five to six years ago so now I'm pushing back against what's happening and I think a lot of it's because of that," said Republican Rep. Vern Buchanan of Florida, who is sponsoring a bill on it.

"The legal process of legislating is much slower than the regulatory process, so we're continuing to encourage the DOI to do the right thing and do this by regulatory means that would be the more likely way to get this through in time for the winter so it's a dual push," said Democratic Rep. Darren Soto of Florida, who is also co-sponsoring the legislation.

Scientists explained steps people can take to help, things like not using fertilizer on lawns during rainy seasons; or washing cars in grass to limit runoff.

Back out on the water, Bartlett still has hope.

"I hope she has eaten enough and waits as long as she can before she heads to the East Coast if that's what she's going to do. I hope she survives the winter with room to spare," said Bartlett.