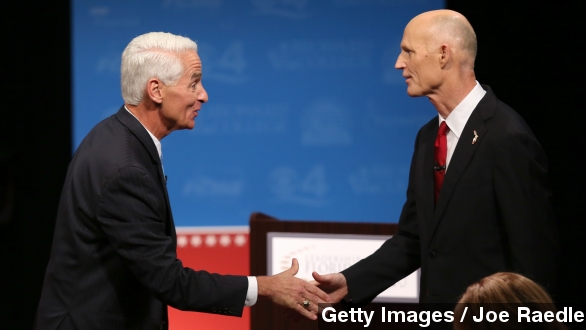 It was a race that rekindled political rivalries —

— and produced some bizarre moments.

"Somehow, there is a fan there."

And now, it's over. Florida's Republican Governor Rick Scott narrowly staved off a tough challenge from Charlie Crist, the former Republican governor who joined the Democrats less than two years ago.

In a cycle full of negative races, this one stood out. Crist had doubled down on painting Scott as too conservative for Florida, especially on social issues.

"If he won't stand up for your paycheck, maybe it's time to stop paying his."

But ultimately, it was Scott's criticism of Crist's economic record that seemed to stick. The current governor blasted the former governor for the steep jobs losses during his term.

All the negativity was fitting, considering more Floridians view both candidates unfavorably than favorably. As FiveThirtyEight noted, that's not the case in any other governor's race nationwide.

For Crist, this is another high-profile political loss. He ran for and lost a U.S. Senate race to Marco Rubio in 2010, then lost to Scott in 2011 for governor. And today: deja vu.

Scott's win means a Republican has served as Florida's governor in five straight terms, going back to Jeb Bush in the '90s.