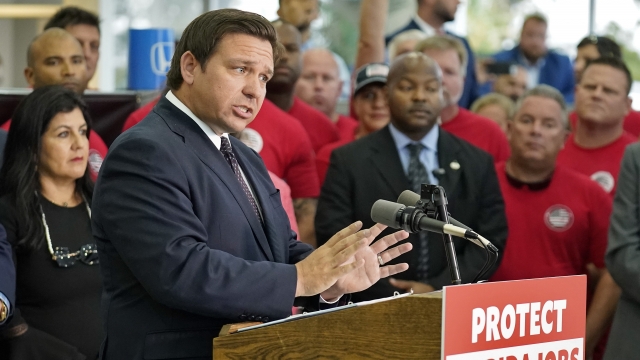 State governors are taking swift action against a federal vaccine mandate for businesses with over 100 employees.

DeSantis, a Republican, signed the bills into law at a ceremony alongside leaders of the GOP-controlled statehouse and other state officials who said they were protecting people from burdensome federal vaccination requirements.

The signing ceremony closed a three-day special legislative session called by DeSantis as he continues a campaign against vaccine mandates pushed by the White House.

The governor, who is running for reelection and eyeing a potential 2024 presidential run, has become one of the nation's most prominent Republicans through his opposition to lockdowns and other virus rules.

The new law prevents businesses from having vaccine mandates unless they allow workers to opt out for medical reasons, religious beliefs, immunity based on a previous infection, regular testing or an agreement to wear protective gear.

The state health department, which is led by Surgeon General Dr. Joseph Ladapo, who opposes mandates, will have authority to define exemption standards.

The bill also includes fines for businesses that fire a worker without allowing the exemptions.

Additionally, it bars schools and governments from having vaccine mandates and allows parents to sue schools with masking requirements.

Another bill signed by DeSantis prevents the state health officer from being able to mandate vaccines during a public health emergency.

He also approved a bill directing the state to begin considering a withdrawal from the federal Occupational Safety and Health Administration, which drafted White House vaccine requirements for private businesses with more than 100 employees.