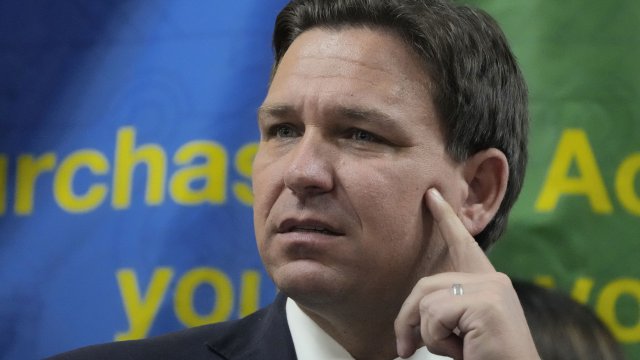 Florida’s Governor Ron DeSantis took part in the latest tactic Republican governors have employed to push back on what they view as President Biden and Congressional democrats’ inaction on the migrant crisis. DeSantis sent two charter planes Wednesday carrying migrants to Martha’s Vineyard — a popular vacation spot off the coast of Massachusetts.

"The minute even a small fraction of what those border towns deal with every day is brought to their front door, they all of a sudden go berserk and they’re so upset this was happening," DeSantis said.

The planes, which were carrying roughly 50 migrants including children, arrived around 3pm with no warning, according to local officials.

Earlier this summer, Gov. Doug Ducey of Arizona and Gov. Greg Abbott of Texas began sending buses full of migrants apprehended at the southern border to Washington D.C., often with no warning.

"In any one sector in the state of Texas, we have more than 5,000 people coming across that sector every single day," Abbott said.

D.C. Mayor Muriel Bowser declared a public health emergency last week in order to redirect more resources to support the thousands of migrants who have arrived in the nation’s capital from Texas and Arizona. And just last month, Texas Gov. Abbott began sending migrants to New York and Chicago as welll.

Illinois governor JB Pritzker issued a disaster proclamation and has tapped the state's national guard to help handle the hundreds of migrants being sent from Texas.

Nearly a dozen busloads of immigrants have arrived in recent weeks in Chicago, with some migrants being relocated by the state to hotels in the suburbs — angering local mayors.

Chicago Mayor Lori Lightfoot has called on the Biden administration to provide more federal assistance in light of Texas’ action.

"Governor Abbott's racist and xenophobic practices of expulsion have only amplified the challenges many of these migrants have experienced on their journey to find a safe place," Lightfoot said.