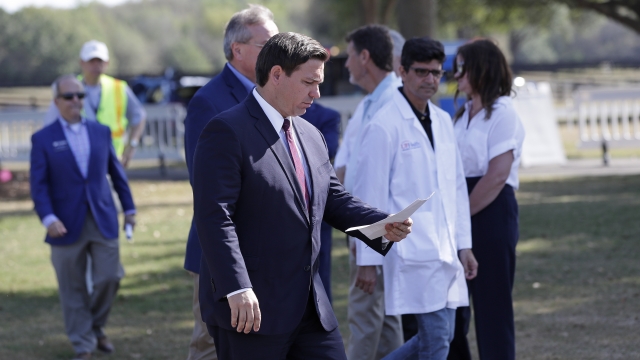 DeSantis was slow to crack down as spring break partying went on unabated. As the pandemic set in, he put restrictions on restaurant capacity but was hesitant to close them, before recently shuttering dine-in eateries and bars.

DeSantis originally issued a stay-at-home order for residents in Miami and surrounding South Florida counties until April 14. He set up highway check points to isolate visitors from states with high infection rates.

The governor has blamed some of Florida's rise on its high number of visitors from New York, which on Tuesday had nearly 80,000 coronavirus cases. But DeSantis last week scoffed at stay-at-home mandates there and in California, where Gov. Gavin Newsom issued a statewide order March 19.

"It's not clear to me that doing a massive shutdown of the entire state would even work. I think you're seeing in some of the states that have done this, there's really been huge non-compliance. I mean New York City, it's like the party never ended. You've got people congregating all over the place. You see images from California, and Orange County, I don't think the beaches…They may have never been so crowded."

Florida, with 21 million people, had its first detected coronavirus case at the start of March. As of April 1, the state had nearly 6,800 infections.

Compare that to California, which had its first case at the end of January. With a population of 40 million, California on April 1 had 8,500 cases, a markedly lower rate.

On March 22, The Miami Herald blasted the governor in an editorial. It called DeSantis a "timid leader in the face of the growing scourge" and demanded that he "act like you give a damn."

DeSantis has directed the state National Guard to set up coronavirus testing stations. But he previously said excessive containment measures could cause lasting economic damage.

Of the eight U.S. states with the highest number of coronavirus cases, Florida was the last one to impose a statewide order to shelter at home.