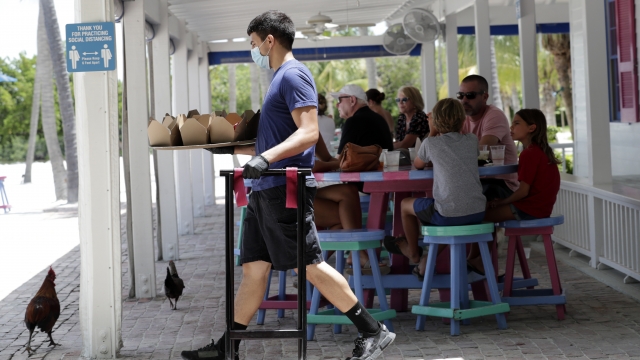 SMS
Florida Could Become COVID-19 Epicenter In U.S. After Case Spike
By Antoinette Miller
By Antoinette Miller
June 21, 2020
The age of those testing positive is trending younger, and the Florida governor has called for bars to enforce customer social distancing.
SHOW TRANSCRIPT

Florida could soon become the new epicenter of the coronavirus in the U.S. as the state saw a record single-day increase in cases since the pandemic began.

On Saturday, the state announced more than new 4,000 infections. On Sunday, the Miami Herald reported a streak of single-day records for new cases ended with about 3,500. Still, the total number of cases in Florida is nearing 98,000 with more than 3,000 deaths.And a group of scientists said in a report that Florida has the makings to be the next epicenter of the virus in the U.S.Florida Gov. Ron DeSantis had previously argued that the rising number of cases was due to more testing in the state. But over the weekend, DeSantis said it cannot simply be attributed to an increase in testing because "the number of people testing positive is accelerating faster than that.”

The governor said businesses serving young people, including jam-packed bars, need to enforce social distancing. The median age for new cases reported Saturday in select Florida counties ranged between 27 and 32. Most of Florida, including Miami, is currently in phase 2 of reopening, which allows for restaurants, bars and hair salons to operate at partial capacity.

In the past week, Arizona, California and Nevada have also reported spikes in COVID-19 infections.