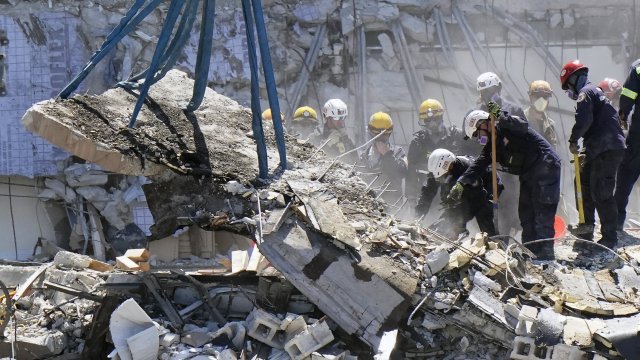 Parishioners and survivors attended a Sunday service at St. Joseph's Catholic Church in Surfside, Florida, to honor and pray for the victims and families of those still missing from the condo building collapse.

Joe and Michelle Tano lived in the area for years before moving to nearby Miami Beach. They have remained loyal to the church community at St. Joseph's, still attending Mass there regularly.

On Sunday, they were taken by the site of the gaping hole where the building once stood. Though authorities were keeping people blocks from the site, the skyline was noticeably different from the church parking lot, they said."It hits home," Michelle Tano said. "Once we were driving here, right now, we was like, 'Wow. It's right there."

The church's priest, Father Juan Sosa, recognized the victims of the collapse and those still missing during the service. Among those in attendance was at least three survivors: Alfredo Lopez, his wife and son. They were asleep in their beds when a "boom" jolted them awake.

Lopez said his family lived in unit 605 of the building that collapsed. Unit 604, where he said his neighbor, a "lovely lady," resided, collapsed to the ground.

"Everything that I saw when I opened the door, you know, facing east, there was nothing there… It was just darkness, and that – that is, that is indescribable, you know. It's freaky as freaky can be," Lopez said."I have a lot of survivor's guilt on this," he told The Associated Press on Sunday. "I hope to God that they're going to find somebody, but man, you know, if you saw what I saw - nothingness and then, you go over there and you see, like, all the rubble. How can somebody survive that?"

Parishioner Hope Sadowski hugged and greeted other parishioners and said that although the devastation is very small in comparison to 9/11, "This is our 9/11.""The only thing left for us to do is to have faith in God," she said.

More than 150 people remain unaccounted for in Surfside.

Fire in the rubble pile slowed efforts earlier in the weekend, but scores of rescue workers remained on the massive pile of rubble.