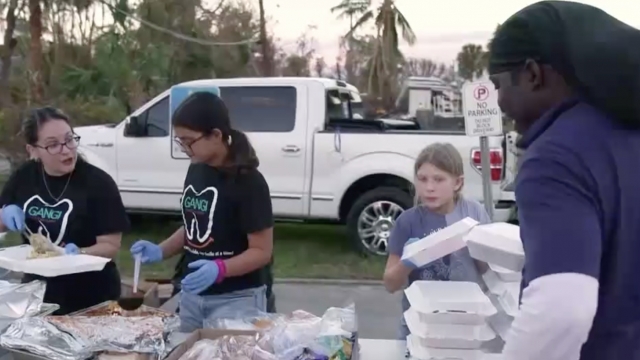 Florida business owners traveled to the Harlem Heights neighborhood to help others not as lucky to have missed the storm's most brutal impact.

Harlem Heights is a poor, majority Hispanic community in Florida. Residents there say they feel neglected after Hurricane Ian hit the area — but owners of a business located hours away are changing that.

After the storm nearly hit his family, Peter Gangi decided to pay it forward by creating his own storm distribution event in one of the poorest areas of Lee County's Harlem Heights.

"We're from Sarasota, and it was supposed to hit Sarasota," Peter Gangi said. "When it didn't hit Sarasota and we saw the news, I said, 'We have to do something.'"

That something was a traffic-filled, six-hour drive with friends and family with skill sets that were necessary after the storm.

Dr. Daina Reyes, a counselor, talked to people there about managing stress.

Displaced Fort Myers residents are camping out at a Walmart parking lot after Hurricane Ian.

The storm left knee-deep standing water in the area. Nearly two weeks later, that water receded, leaving residents' damaged possessions. Some people there lost everything, including their only mode of transportation, making it difficult to get to supply giveaways.

"They definitely still need a lot of food," Andrea Gangi said. "They've been taking a lot of diapers, and they said they can't find them in the stores."

A little less than 2,000 people live in Harlem Heights, and many live below the poverty line. The census reports the average annual household income in Florida is about $57,000. In Harlem Heights, it's less than half that — around $25,000 a year.

Hispanic people make up the majority of this community's residents.

"The neighborhood they went to first, it was full of immigrants from all over," Andrea Gangi said. "This is another reason we came out too because we're immigrants."

"They were actually scared to come out," Peter Gangi said. "Some of those people don't have papers, don't have documents, and they were feeling scared like, 'Hey I don't want to get deported.' Coming from a Hispanic background, we have to help out everyone but especially the minorities, especially the Hispanic and Haitian communities."

"Just to be able to to provide to this community and be a blessing to them, it's very humbling, and I'm happy to be out here," volunteer Michael Martinez said.

Over two weeks so far, the group has been able to distribute more than 1,800 meals.