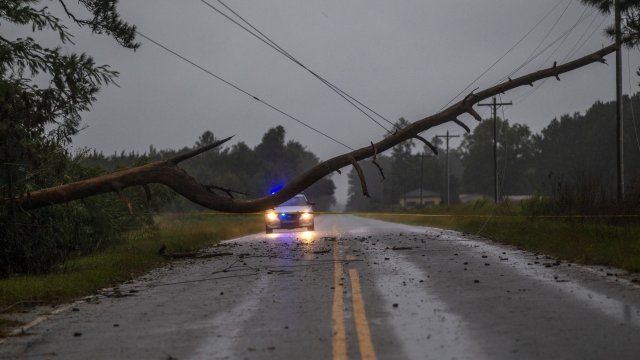 SMS
Florence Continues To Dump Massive Amounts Of Rain On East Coast
By Ethan Weston
By Ethan Weston
September 16, 2018
North Carolina's governor said Saturday the danger of flooding is worse now than when the storm first made landfall.
SHOW TRANSCRIPT

Former Hurricane Florence has been downgraded to a tropical depression, but it's still dumping tons of rain on the East Coast — and breaking records, too.

The storm already broke North Carolina's record for most rainfall from a tropical storm. The previous record, 24.06 inches, was set back in 1999. As of Saturday night, Swansboro, North Carolina, had received the most rainfall in the state — almost 31 inches.

North Carolina's governor released a statement Saturday saying the danger of flooding is a larger problem now than when Florence made landfall.

All that rain and flooding has environmental regulators worried, too. The EPA is reportedly keeping an eye on 41 toxic waste sites for signs of hazardous substance spills during the flooding.

And the rain is likely to keep coming. The National Oceanic and Atmospheric Administration reports some parts of North Carolina could see total rainfall accumulations of 30-40 inches. And The Washington Post reports that overall, the storm is expected to dump enough rain to cover Texas in 4 inches of water.