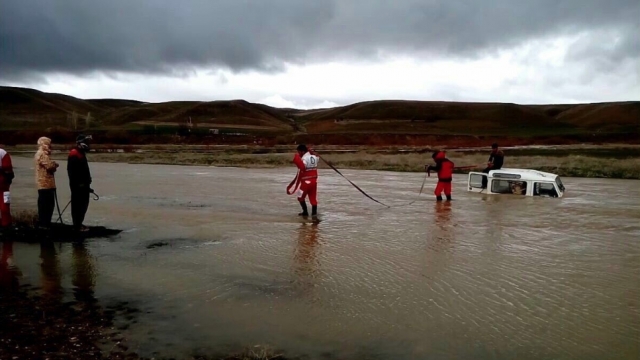 Heavy rainfall and floodwaters across Iran have killed at least 70 people... and it's not looking like it's going to stop anytime soon.

Authorities issued flood warnings in the southern part of the country, which has a number of rivers and dams.

The rain started in mid-March, leading to continuous flooding. It has since reportedly destroyed nearly 2,000 cities and villages across the country, displacing thousands of people. One Iranian news agency said the heavy rain has also caused hundreds of millions of dollars worth of damage to water and agriculture infrastructure.

The agency said some 140 rivers have burst their banks, and people have reported hundreds of landslides.

The Iranian Red Crescent Society says "volunteers and staff have evacuated hundreds of people to safety" and are handing out items like tents, blankets and health kits to thousands.

In a statement earlier this month, Secretary of State Mike Pompeo expressed his condolences to the Iranian people and said the U.S. "stands ready to assist and contribute" to the IFRC for relief.

The aid network said it's "released" nearly $500,000 to quote, "bolster local Red Crescent relief efforts" in Iran, but the speaker of Iran's Parliament says the country hasn't "received even a dollar from the Red Cross due to U.S. measures and sanctions."