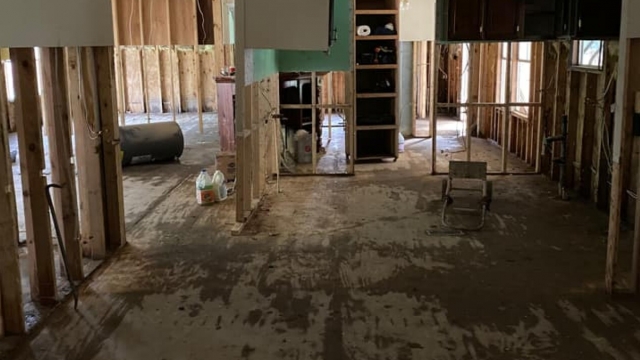 When Katie Turner and her husband closed on their first home on July 22, it felt like a miracle. Six days later, before they could even move in, that miracle was under several feet of flood water.

The couple had saved and saved to afford their first home, and the process of buying the Jackson, Kentucky home was full of hurdles.

"That Friday when we closed, I told my husband, 'I feel like I can finally breathe, like, it's ours,'"Turner said. "And then six days later, it's not. I mean it is, but it's not."

The home is now a shell, with all of the duct work, heating and air systems and appliances destroyed.

"The inside is completely gutted," Turner said. "It's down to studs."

They were supposed to move into the house on July 29 – the day after the home flooded.

In order to qualify for FEMA assistance, a person has to have proof that they lived at the affected residence – proof Turner doesn't have.

"It's laughable at this point," Turner said. "I have cried until I can't cry anymore because 5, 6 days after you close on your first ever home, a 1-in-1,000-year flood comes and you can't get assistance from anybody to help you. You're kind of just left feeling hopeless."

Turner said they put much of their available money into a down payment on their new home, and that they still will owe mortgage payments on the "shell" of a home that remains.

Turner has filed an appeal to FEMA's denial of help and said she doesn't know where else to turn.

"The last (FEMA) agent I spoke to said, if you can't show proof of occupancy then it's going to be very hard to give you any assistance," Turner said. "That's all he kept repeating to me."

Turner set up a GoFundMe page that had raised a little over $2,200 as of Monday afternoon.

Turner's church is letting her family stay at its parsonage for now, and she said she’s grateful they have a place to stay. But she doesn't know what will happen next.

"All I want to do is lay in bed," Turner said. "I don't want to get out of bed, but I know I have to. Because for whatever reason this is where we are and so we just have to try and make good out of it somehow."

LEX 18 asked FEMA about Turner's situation, but they said they do not discuss specific people's applications for aid. The agency reiterated that the program helps those who are uninsured or under-insured who have sustained damage to their primary residence as a result of a disaster. They also encouraged anyone who disagreed with their eligibility determination to call 1-800-621-FEMA (3362) or visit one of FEMA's Disaster Recovery Centers.

FEMA also said in their response that as of Sunday the agency had approved more than $10.7 million in aid to survivors of the Kentucky floods.

This story was originally published by Leigh Searcy and Morgan Eads on lex18.com.