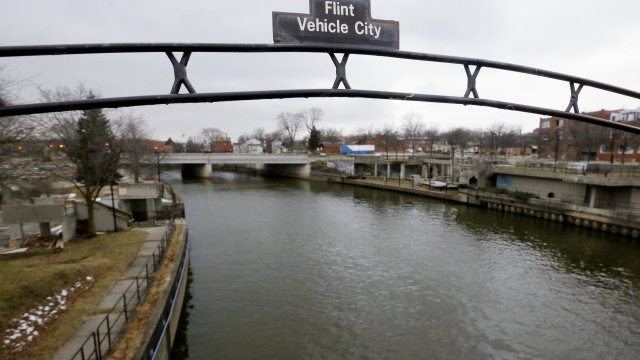 NEWSY'S DAVE BRIGGS: Nearly eight years after lead and other contaminants were first discovered in the water in Flint, Michigan, victims are finally seeing justice.

NEWSY'S VERONICA DE LA CRUZ: That's right, a judge approved a $626 million settlement with the state. The health crisis started in 2014 when the city switched water sources and didn't invest in the equipment needed to properly treat water from the new source. Joining us now to discuss the significance of the settlement is Flint, Michigan, mayor Sheldon Neeley. Good morning to you.

MAYOR SHELDON NEELEY: Good morning. Thank you for having me.

VERONICA: Of course. What does this settlement mean to you and to all residents of Flint?

NEELEY: Well, you know, forgive the oxymoron, but it's the first final steps into resolving the issue of this water crisis in our community. It's been a long time, you know, more than eight years here. Moving this community forward is so paramount to making sure that we can get the steps to recovery for these families that were negatively impacted by the poor quality of water.

BRIGGS: Who will see most of the money from the settlement?

NEELEY: Well, for the first half of this settlement, the children will see the most parts of the monetization of this settlement. The city of Flint was a defendant in this case as well, as well as the state of Michigan, and the engineering firm and also a local hospital, but there are three more defendants in this case: EPAB, one of those defendants, and two more other bigger defendants. And so the monetary amount could go up when those things are adjudicated in the court. And so residents stand to see more dollars once we start moving forward and getting those other defendants in the courtroom.

DE LA CRUZ: What is being done in the meantime though, mayor, because a lot of those children are going to suffer long-term impacts from what's happened. Will there be medical assistance for them? Will there be more money for them in the future?

NEELEY: You know, there's no amount of money that can ever resolve when a kid's trajectory has been negatively impacted. And I'm going to repeat that: There's no amount of money that can ever offset that. But yes, there have been programs set up to make sure that these young people will have the medical assistance moving forward to make sure they can have the best life as possible with the conditions in which they were facing as young people. And so dollars and cents have been there. On the infrastructure part, you know, we're replacing all the lead service lines in our community and also we're building major infrastructure projects that relates to water. Our secondary water delivery system is being built, taking fresh water from Lake Huron. This assures that we will never ever have to go back to the source of water that contaminated so many families inside the city of Flint.

BRIGGS: We wish Flint was alone in this problem, but you are certainly not. Beyond the $626 million settlement there, we've got this $1 trillion infrastructure package signed into law by the president. How much of that will go to drinking water in Flint and other communities across the country dealing with this problem?

NEELEY: We're much further along than many communities because we have been remediating lead service lines in our local community and we're almost completed with that project now. And so other communities can use Flint as a template, gleaning from us the positive ways to be able to go about removing lead from a community and making sure that they would never have to face the same challenges that we have here in the city of Flint. Now the legislative dollars that are going forward to replace infrastructure throughout the country — we are trying to get a portion of that to make sure that we can continue moving this community forward with the remediation of our infrastructure as it relates to water. We have external and internal issues here. Some of the internal structures of our homes have been contaminated as well because what has happened is that the cause of the abrasive water causes lead to leach into the water, and some people in their residential homes have had lead and copper pipes. And so we're working toward that end now, making sure every family can be safe from contaminated water inside the city of Flint.

DE LA CRUZ: You know, Flint has about 100,000 residents and the payout is going to be about $626 million. What is the average payout going to be? I understand that not everybody is happy about this. I know the former mayor was saying that it's a slap in the face.

NEELEY: Right, you know, the first half of the negotiations happened mostly under their watch. But now in the second half, where we have three more defendants, we're looking at making sure that families are going to be made whole the best way they can. There's no amount of money that can really help remediate the problem when you have a trajectory of a child that's been offset. And so we're working toward the second half, the three defendants that's still remaining in the case of this lead problem that we faced here inside the city of Flint. But you know, not many residents are happy about that. And the amount of money that's going to be divided up, most of the money, probably 80% of that $626 million dollars, will go to the children that were impacted.

NEELEY: Thank you and God bless you.