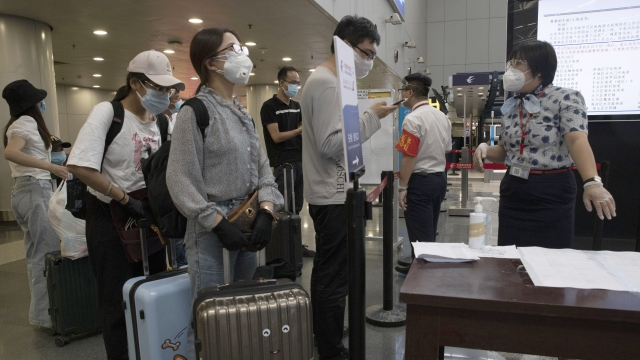 SMS
Beijing Cancels Majority Of Flights Over New COVID-19 Outbreak
By Katherine Biek
By Katherine Biek
June 17, 2020
More than 130 new coronavirus cases have recently been reported in the Chinese capital, which has been placed under a so-called "soft lockdown."
SHOW TRANSCRIPT

A majority of flights in and out of Beijing were canceled Wednesday as officials continue to step up their response to a new COVID-19 outbreak.

The Associated Press says authorities are describing the situation as "extremely grave." More than 130 new coronavirus cases have recently been reported in the Chinese capital, which has been placed under a so-called "soft lockdown."

The new cases are being linked to a wholesale food market in the city. The 2,000-stall market was shut down over the weekend. But thousands of people from all over the country visit the market on any day, so officials fear the outbreak could spread pretty far.

As a result, Beijing officials raised the city’s coronavirus alert to the second-highest level, allowing for movement in and out of the area to be "strictly controlled."

While many countries have suspended travel to China over the coronavirus, Beijing's Capital International Airport is usually the second-busiest airport in the world when it comes to passenger capacity.