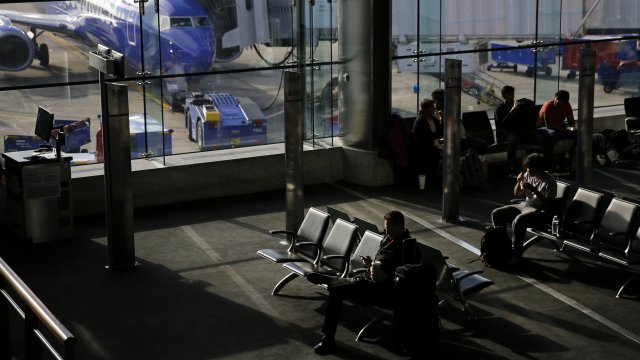 After the Russian invasion of Ukraine, a University of Central Florida student developed a bot to track the movements of aircraft owned by Russian oligarchs. The prospect of a teen pinpointing the exact location of oligarchs’ planes may seem far-fetched, but there’s a whole community of flight trackers creating databases to keep eyes on the sky.

The Russian oligarch bot and other flight trackers use information from the Automatic Dependent Surveillance-Broadcast system, or ADS-B, to figure out the location of planes. These devices are installed on most U.S. aircraft and collect data, such as a plane’s speed, position and altitude, primarily to help air traffic controllers. That data is then transmitted to ADS-B receivers on the ground or on satellites.

After the messages are decoded, the data is sent to servers which process the information and display it on flight tracking websites or apps.

“There is data, and if you look at it, it's all ones and zeros and text and latitude and longitude," said Lee Armstrong, chief technology officer of PlaneFinder.

"Whilst we make it easy and put it onto a map, this ability has always been there, and now social media has come on, so you can now share [flight data]."

ADS-B receivers are relatively inexpensive, and flight tracking companies like ADS-B Exchange, which is used by the bot tracking Russian oligarchs, offer guides on how newbies can set up those receivers. Creators of these flight tracking websites told Newsy they initially created the spaces for aviation and broadcast enthusiasts to connect but soon found that they could easily crowdsource data from the hobbyist community to make readings more accurate.

"These sorts of sites would not be possible without the volunteers who sign up to send data from their geographic location to us," said Dan Streufert, founder of ADS-B Exchange. "We have 8,000 receivers throughout the world. About 50% of those are in the U.S. and the major concentration in western Europe and some in Australia."

“The people that host our receivers are very passionate about what they do," Armstrong said. "They strive for the best equipment that they've got. We'll quite frequently find that if they're hosting a receiver for us, they'll also be hosting two, three or four other tracking networks.”

Moving forward, Streufert told Newsy that he wants to be able to get these receivers out to more low population density areas as a means to better track flights globally, especially in Africa and the Middle East.

“Some of our volunteers have family in Iraq, for example, and so they put up receivers in Iraq," Streufert said. "The most underserved areas that we have are low population density areas.”