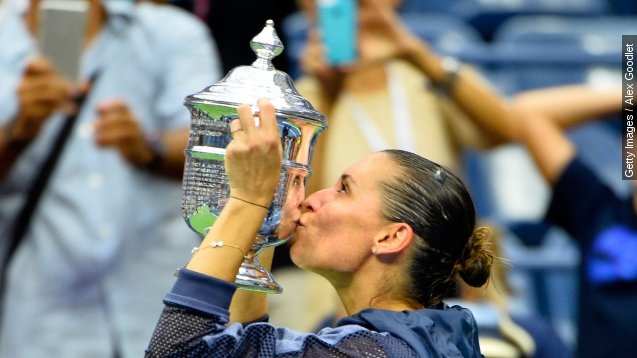 Italy finally has its first U.S. Open winner. In a match no one predicted, Flavia Pennetta defeated another Italian, Roberta Vinci, in the final of the Grand Slam tournament. What was even more surprising is what Pennetta did right after her first Grand Slam win.

"I took a big decision in my life. This is the way I would like to say goodbye to tennis," Pennetta told ABC's Robin Roberts.

Yep, she announced her retirement right then and there. Sounds like a good way to go out, if you ask me. But the BBC said Pennetta clarified her statement, saying she's not throwing in the towel until the end of the year.

The all-Italian final wasn't what many expected to see at all. Pennetta was just the 26th seed going in and Vinci wasn't seeded at all. Most predicted that at least one of the final women would be tennis icon Serena Williams.

Vinci surprised everyone Friday when she killed Williams' hopes of a calender Grand Slam for 2015.

But it seems to be fitting that Pennetta and Vinci met up in the final. Multiple outlets say the two faced off when they were kids.