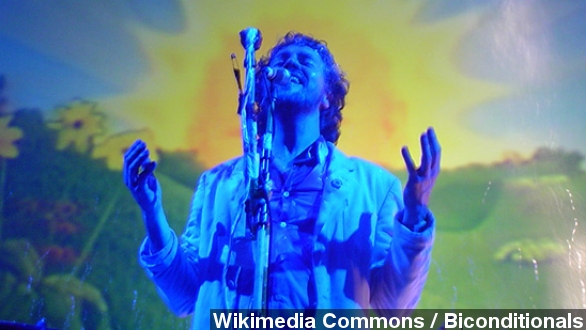 By Erik Shute
March 31, 2014
Oklahoma psychedelic-rock band The Flaming Lips announced the release of its next album, dedicated to Pink Floyd's "The Dark Side of the Moon."
SHOW TRANSCRIPT

​The Flaming Lips apparently weren't kidding when they set out to make a companion album to Pink Floyd's phenomenal record, "The Dark Side of the Moon."

In a press release Monday, Wayne Coyne and his Oklahoma psychedelic-rock band announced their next album, "Flaming Side of the Moon." The band says the album is "designed as an immersive companion piece to the original 1973 album."

So, "Flaming Side of the Moon" won't be your average iTunes release. Instead, the band is asking fans to take the music a step further and listen to it simultaneously with the Pink Floyd album, according to Rolling Stone. It adds, "For ideal listening conditions, fans are encouraged to seek out the original Alan Parsons' engineered quadraphonic LP mix of 'Dark Side,' but it will work with the album on any format."

The Flaming Lips claim the album will be sold "through all participating digital outlets."

Stereogum notes family and friends of the band will each receive some of 100 exclusive vinyl pressings of the album. Fans and loan-ridden college students who can’t commit to paying can actually stream the entire album on SoundCloud now as well.

But, before anyone made mention of when "Flaming Side of the Moon" was going to be released, music blog Consequence of Sound was convinced the album was an April Fool's Day prank in waiting.

On Sunday it said, "The Lips have made no mention of the project; rather they're known to be working on a covers album of Sgt. Pepper's Lonely Hearts Club Band." (Via Consequence of Sound)

Since then, the blog has reported the album is real, but its skepticism might have been justified. As of Monday, the site and several other music outlets can't seem to find the album selling online. Oh, and that Beatles cover album the blog mentioned — that's real, too. It's in collaboration with the band's tour mate, the one and only Miley Cyrus, as well as Tame Impala and one half of MGMT.

In 2009, the band invited a few friends to cover the entire Pink Floyd album in an experiment called "The Flaming Lips and Stardeath and White Dwarfs With Henry Rollins and Peaches Doing The Dark Side of the Moon."

Also, during a New Year's Eve show in Oklahoma City, band members played their version of "Dark Side" front-to-back for the crowd.

And speaking of "syncing," Pink Floyd's original "Dark Side" album is rumored to be magically synced with the classic movie "The Wizard of Oz." The Flaming Lips claim their companion plays alongside the yellow brick road as well.