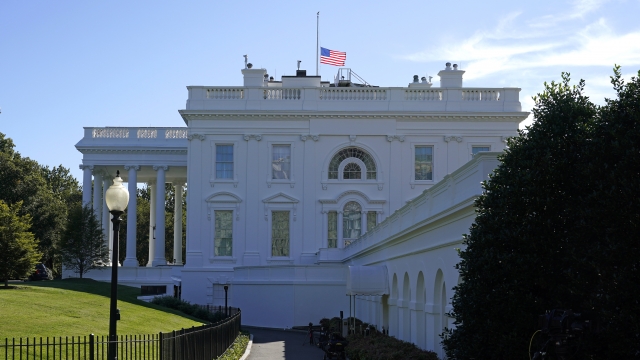 This is a live look from the White House where flags are flying half staff in honor of the late justice.

This symbol of respect — also ordered on all public grounds — and the capitol building.

And, of course, the Supreme Court building where Justice Ginsburg spent so many hours in her younger years as a lawyer, fighting against gender discrimination and winning.

And decades later, sitting behind the bench as the second female Supreme Court justice, ruling on landmark legislations that would impact the lives of women in this country.

From President Trump to the every day American impacted by her decades of work.

Expressions of gratitude, respect and mourning are still pouring in this hour.

Justice Ruth Bader Ginsburg passed away Friday after a long battle with cancer.

She was known for being a small woman with a "tough as nails" stature, championing progressive and divisive social issues like abortion rights, same sex marriage and LGBTQ rights.

In the '50s, Ginsburg was just one of nine women in her class at Harvard out of 500 men.

In her second year, she made the law review, meaning she was at the top of her class.

She finished school at Columbia and graduated, but no one would hire a woman — a Jewish one, at that.

When she eventually got a job, she did something no female lawyer had done before — tried to prove that women faced the same type of discrimination that people of color did in the workplace.

In the 1970s, it was legal to fire a woman for being pregnant.

Ginsburg hid her second pregnancy under baggy clothes until she'd received a contract.

Banks could require a woman to get their husbands to co-sign their credit card applications.

And in 12 states, men couldn't be prosecuted for raping their wives.

And that's where Ruth Bader Ginsburg stepped in. And she ended up convincing nearly all nine white men on the supreme Court that gender-based discrimination did indeed exist.

And in her history as a lawyer, she won five out of six cases she argued in front of the Supreme Court.

But Ginsburg has said one of her favorite majority opinions is when she ruled Virginia Military Institute's male-only admission's policy violated the qeuality protection clause.

She came back to the school 20 years after the 7-1 ruling and read aloud a poem sent to her from someone angered by the decision.

And while she gained a late-in life cult following among women and men alike, not everyone was her biggest fan.

She drew backlash after she called then-candidate Donald Trump a "faker" back in 2016.

She told several media outlets she couldn't "imagine" what this country would be if he was the president and that he really has an ego.

President Trump tweeted that her mind was shot and demanded her resignation, and Ginsburg eventually apologized.

Many were angered by her comments, saying as a justice, it isn't her job to make political statements.

But in a statement dedicated to her granddaughter shortly before her death, the late justice said, and I quote: "My most fervent wish is that I will not be replaced until a new president is installed."