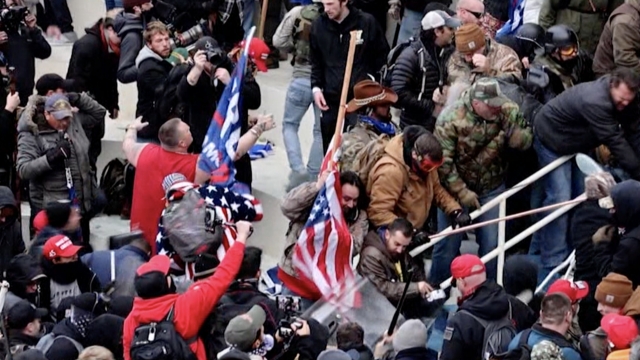 Newsy has learned there were no rules in place to stop insurgents from bringing flagpoles to the U.S. Capitol where they became weapons against police.

The FBI has arrested Peter Stager, the man they say is seen on video beating an officer just outside the building.

And a man, identified by authorities as Kevin Seefried, used a flagpole to fly the Confederate flag in the halls of the Capitol, a stunning display in a temple of American democracy.

The mob was able to carry flagpoles because their march to the Capitol was not part of a secured, permitted event where authorities can restrict people from bringing most anything they deem dangerous.

The National Park Service bans flagpoles for the masses viewing fireworks over the Washington Monument on Independence Day.

The U.S. Secret Service forbids “supports for signs and placards” at inaugurations.

Agents also prohibited them at the rally on the north side of the Ellipse near the White House on Jan. 6 where President Trump directed his supporters to go to the Capitol.

Video of the “Save America” rally shows no one in the crowd had flagpoles.

But across the street, outside Secret Service jurisdiction, an overflow of people gathered, as was their right under the First Amendment, no permit needed.

Many were seen with flagpoles in hand as the made their way to Congress.

“People will sometimes use a flagpole as a weapon,” said Ed Maguire, a criminology professor at Arizona State University. “That’s why a number of municipalities over the years have put ordinances to ban carrying these things.”

Flagpoles are allowed to be carried in Washington outside of organized events.

“I think we need to take those First Amendment rights very seriously but we need to balance those against the idea a flagpole can be used as a weapon that can injure or kill somebody,” Maguire said.