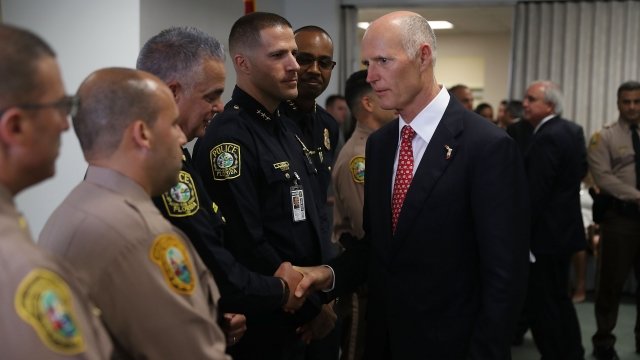 The $400 million act raises the age to buy a firearm in Florida to 21, requires a three-day waiting period for most firearm purchases, bans the sale or possession of bump stocks and includes requirements for mental health and safety programs in schools. It also lets some teachers and staff carry weapons on campus, which Scott says he's still opposed to.

"I still think law enforcement officers should be the ones to protect our schools. I have heard all the arguments for teachers to be armed, and while this bill was significantly changed on this topic, I am still not persuaded," he said.

This provision in the new law known as the Coach Aaron Feis Guardian Program isn't mandatory and leaves the decision to arm teachers up to locally elected officials.

Within hours of the bill being signed into law, the National Rifle Association filed a federal lawsuit saying it violates the Second Amendment. The lawsuit asks the courts to block the age restriction.