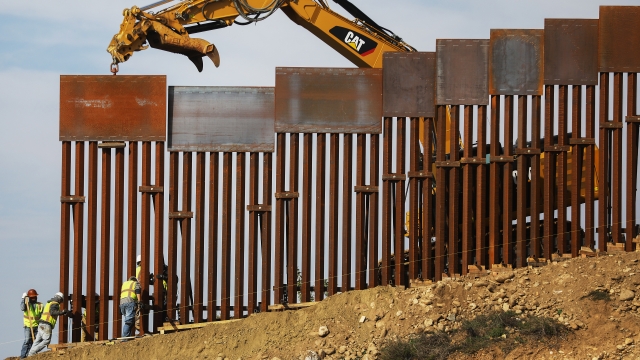 SMS
Trump Extends National Emergency Declaration For U.S.-Mexico Border
By Katherine Biek
By Katherine Biek
February 14, 2020
The February 2019 declaration gave the president access to billions of dollars in government funding for the wall without going through Congress.
SHOW TRANSCRIPT

President Donald Trump is extending the national emergency declaration at the U.S. southern border for another year.

The president first declared a national emergency to build a border wall in February 2019. It gave him access to billions of dollars in government funding for the wall without going through Congress.

In a notice submitted to the Federal Register Thursday, the White House said the extension was necessary because, "further action is needed to address the humanitarian crisis and to control unlawful migration and the flow of narcotics and criminals across the southern border of the United States."

The notice came the same day the Pentagon told Congress it plans to divert an additional $3.8 billion in Defense Department funds to pay for the wall.

The Trump administration is facing multiple lawsuits over its decision to reallocate money toward border barrier construction. But several courts, including the U.S. Supreme Court, have allowed the funds to be diverted while the legal proceedings play out.

Democratic lawmakers have also tried to block the declaration several times through legislation, but they've been vetoed by the president.

He already pledged to build "more than 500 miles" of fencing by early next year. So far, the chief of U.S. Border Patrol says about 119 miles have been constructed.