Five Guys Is The Top Fast-Food Joint In The UK 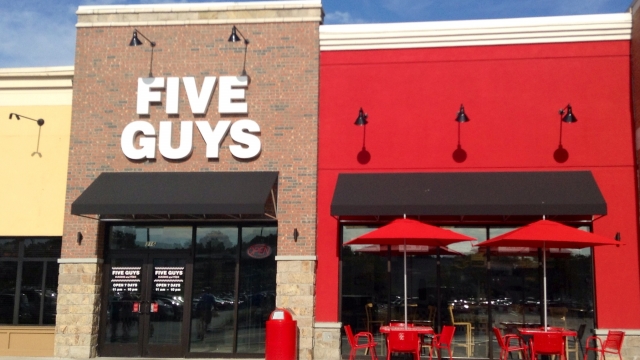 SMS
Five Guys Is The Top Fast-Food Joint In The UK
By Katherine Biek
By Katherine Biek
March 23, 2016
Market Force Information polled customers, and they rated Five Guys, which only opened in the U.K. in 2013, as the top fast-food-food chain.
SHOW TRANSCRIPT

There's a new top fast-food chain in the U.K, and it's a pretty familiar name to those living in the U.S.

The first Five Guys burger joint opened in Arlington, Virginia, in 1986. But it's only been around in the U.K. since 2013.

Which is why it's impressive that Five Guys came out on top when Market Force Information asked more than 4,500 people in the U.K. about their experiences at various restaurants and whether they would recommend said restaurants to friends.

It earned the top scores in staff friendliness, food quality and overall cleanliness.

Nando's, a chicken fast-food joint recognized as the second favorite this year, got top marks in speed and value for money.

It's not a huge surprise that Five Guys ranked third in the value-for-money category. After all, a burger and fries in the U.K. costs customers 11.75 pounds, or roughly just over $16.

This video includes clips from Nando's and KFC and images from Mike Mozart / CC BY 2.0 and Jerry Huddleston / CC BY 2.0.