Fitness Fanatics Use GPS Tracker To Turn Routes Into Art 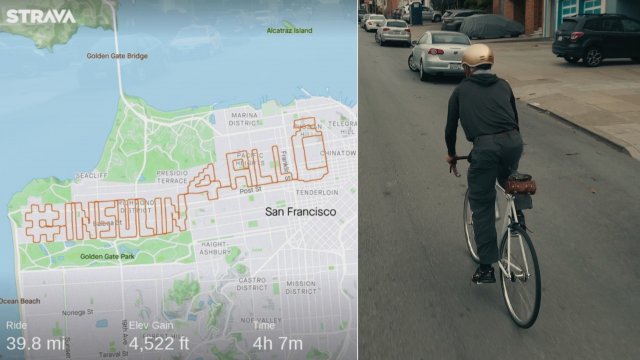 SMS
Fitness Fanatics Use GPS Tracker To Turn Routes Into Art
By Jason Bellini
By Jason Bellini
December 9, 2021
Fitness fanatics are creating art while tracking their runs and bike rides on their phones, mapping their city into a masterpiece.
SHOW TRANSCRIPT

There are no shortcuts or changing course midway when creating art with GPS as your paintbrush.

Jakub Mosur follows points on a map, which he painstakingly plots in advance. Strava, a fitness-tracking app on his phone, traces his every move, so there is little room for error.

"You're basically following a single line across the city to create the piece," Mosur said. "Basically, you have to start the whole artwork all over again if I make a big mistake. So yeah you get one shot, and if you blow the shot, then you're going to have to save it for another time and redo the art."

He uploads his drawings to Instagram, where they join a growing gallery from artists around the world. More than 18,000 pieces are posted under #GPSart representing hundreds of thousands of miles marked.

"I love the physical challenge of wrestling with some of this artwork," Mosur said. "Using my fixed-gear bike and dealing with the hills of San Francisco makes for a great workout. It's a mix of art and exercise."

Mosur's muscular pursuit of this medium began with the pandemic, when San Francisco became a bike rider's paradise. Traffic suddenly went away, and for Mosur, free time suddenly appeared.

"Part of the reason why I was riding so much and doing these giant drawings is because my work had completely dried up during the pandemic, and I really had no other outlet for my creativity, which is usually my work," Mosur said.

His work is usually event photography and photojournalism — a career putting him face-to-face with human struggles that he and his family encountered four months into the pandemic.

One of his two daughters, Zosia, who was then 11 years old, ended up in the hospital, where she was diagnosed with Type 1 diabetes.

JAKUB MOSUR: Right before her diagnosis was my first big piece.

ZOSIA MOSUR: I think you were on a bike ride when I was diagnosed.

JAKUB: Yes, I was. I was drawing a giant picture of Eye of Horus, which is a symbol from ancient Egypt that symbolizes health.

Since then, Jakub has been tracking Zosia's health.

NEWSY REPORTER JASON BELLINI: I remember, even on the ride, you were checking numbers that you were getting sent to you.

JAKUB: I got a couple of alerts that her blood sugar was not in the right place, so it gives me a quick alert.

ZOSIA: Something that we learned very early on in diabetes is that no blood sugar is bad. They're just numbers, and keeping them in range is important to your health. But you should never beat yourself up for having bad blood sugar, so it's not possible for me to have a number in the wrong place.

When Newsy met with Mosur, he was working on a piece that would read #INSULIN4ALL when finished.

"I decided to do that hashtag across San Francisco as a way to reach the world, to raise awareness of the importance of having access to insulin, not just by kids and adults here in the United States, but everybody across the entire globe, all humans," Mosur said.

Across the globe, at least 9 million people, according to a 2017 World Health Organization statistic, have Type 1 diabetes. The level of care Zosia receives, including life-saving insulin, is not affordable "for all."

"It's really terrible that other people can't have access to it because it makes my diabetes so much easier," Zosia said.

As for her dad, Zosia thinks his work is "amazing."

"They're really cool," Zosia said. "He comes to me with these pieces that he draws on his computer and he asked me for advice, 'Hey, how does this one look?'"

"What better way to use my art degree than to basically do a giant etch-a-sketch in San Francisco where I would draw things that inspired me or I had interest in?" Mosur said.