Fish Fossil Shows First-Ever Sex Was Done Side By Side 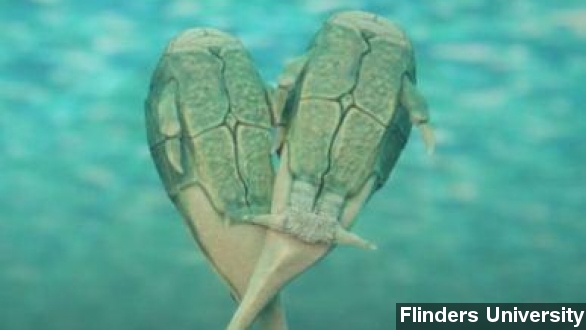 By Steven Sparkman
October 19, 2014
A 380-million-year-old fish may be the first creature to have copulative sex - and it was side by side with arms linked, like square dancers.
SHOW TRANSCRIPT

A 380-million-year-old fish is once again rewriting the history of sex.

This is the placoderm, an ancient class of bony fish. Aside from having cool armor plating, placoderms are significant because the more they're studied, the more they reveal about the origins of sex.

The latest discovery is that the earliest-known form of copulation ever performed on Earth was done side-by-side with arms locked, like partners in a square dance. Great mental image.

Australian paleontologist John Long has been studying placoderms for more than 20 years. In that time, he's made a series of big discoveries about early sex acts. (Video via Museum Victoria)

For instance, prior to Long's work, scientists believed all ancient fish reproduced outside the body like many modern fish do: with the female laying her eggs and the male fertilizing them. (Video via National Geographic)

But in 2008, Long announced he'd found a fossil of a pregnant placoderm, complete with umbilical cord, making it what Nature called "the oldest pregnant mum."

He later found out the males of one species had articulated reproductive organs like modern sharks and manta rays, meaning they may have been the earliest animals on Earth to have penetrative sex.

The newest finding is that sex and live birth may have actually been the norm for placoderms, and took place much earlier than he thought. Plus, you know, that whole "doing it sideways" detail.