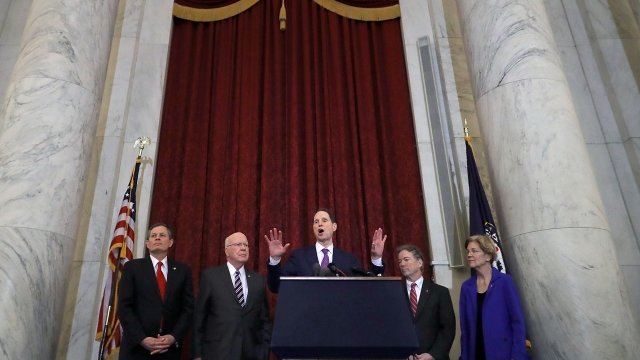 Democratic Sen. Ron Wyden argues the bill to reauthorize FISA Section 702 "ought to be open to a real Senate debate."

U.S. senators just voted to end the debate on a controversial surveillance program from the National Security Agency.

The bill, which is part of the Foreign Intelligence Surveillance Act, or FISA, "allows the government to obtain the communications of foreigners outside the United States." A common criticism of the bill is that it collects information without a warrant, which can then be used against Americans in domestic criminal investigations.

The House Says 'No' To The FISA Amendment

The House voted against a Foreign Intelligence Surveillance Act amendment that would have made information linked to Americans harder to access.

The House voted to end the debate on the bill last week, and the Senate concurred on Tuesday. That means a final vote on the legislation could come as soon as Wednesday.

For a while, however, the fate of the legislation wasn't clear. A bipartisan group of pro-privacy lawmakers led by Rand Paul and Democrat Ron Wyden threatened to filibuster, hoping for more time to change the legislation.

Wyden said during a press conference: "A bill of this importance ought to be open to a real Senate debate, not blast through the Senate on the most extreme procedure with no amendments, no discussion, our way or the highway."

For more than an hour, the vote was stuck at 58-38. Republican John Kennedy and Democrat Claire McCaskill cleared the way for the legislation with the final, decisive "yes" votes.