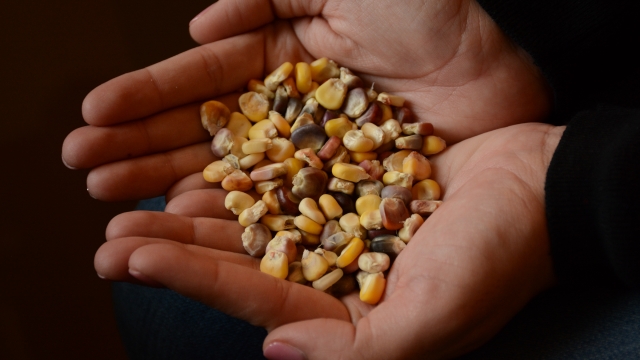 The Cherokee Nation is the first U.S. tribe to send seed samples for storage to the Svalbard Global Seed Vault.

More than 800 miles north of the Arctic Circle, a Native American tribe is taking steps to preserve the genetic material of its crops — protecting agricultural history that dates to before European contact with North America.

Nine samples of heirloom crop seeds belonging to the Cherokee Nation are joining 980,000 other varieties that are already stored in the Svalbard Global Seed Vault in Norway. The Cherokee Nation's deposit is the first seed deposit by a U.S. tribe into the vault.

The vault is located on the Norwegian island of Svalbard and is built into the side of a mountain. The seeds are sealed in special foil packages and are stored at a temperature of -18ºC, or just below zero Fahrenheit. In total, 4.5 million varieties of crops can be stored in the vault.

"Everything has to be done in a specific, certain way. Because ultimately, you’ve got precious cargo right there," Deputy Chief of the Cherokee Nation Bryan Warner said.

According to the vault's operating organization, Crop Trust, the low temperature and permafrost of the storage area ensures "low metabolic activity," which keeps the seeds viable for long periods of time. The vault is meant to protect these seeds from man-made and natural disasters.

If a time arises in which the seeds are needed, they can be withdrawn. This has only happened once since the vault [was created] in February 2008. Crop Trust says a depositor lost access to its gene bank in Aleppo, Syria, during its civil war. The depositor was able to take wheat, lentil and chickpea seeds from the vault to re-establish gene banks in Morocco and Lebanon.

In the case of the Cherokee Nation, its deposit is a combination of corn, beans and squash seed samples. The tribe calls the combination the three sisters.

The Cherokee Nation is now encouraging other tribes to consider storing samples of native seeds within the vault, with the belief that these seeds may help humanity as a whole down the road.

"I think that, you know, we can all agree on something here, that this material in these crops are worth saving. It's worth coming together for everybody," Warner said.