Congress May Pass Largest Prison Reform Since '94. Here's What's In It 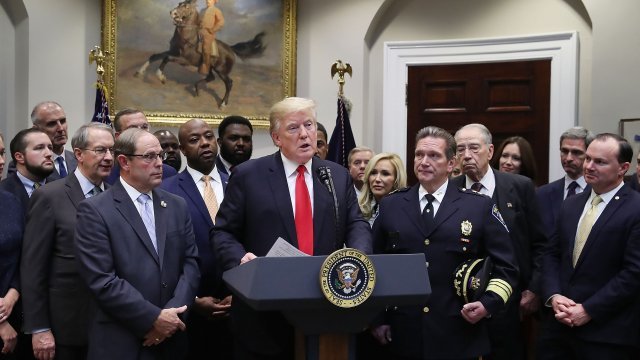 Congress is considering the most widespread change to the federal prisons since the '94 crime bill, and it has the president's approval.

Congress is currently considering the most widespread change to the federal criminal justice system since the '94 crime bill, and surprisingly, it has the support of the infamously tough-on-crime Trump administration.

So what is it? The First Step Act is a sentencing and prison reform bill. It deals specifically with federal inmates, who make up just under 10 percent of America's prison population.

Some of the reforms include mandating that inmates be held within 500 miles of their family, giving inmates an official form of ID before they are released, outlawing the shackling of pregnant women in federal prisons, trading days off of prison sentences for participation in training and educational programs, and several other measures.

"I think the criminal justice system really does have an impact on everybody. Even if you don't realize it, you know somebody who's either got a criminal record or somebody who's been in prison," said Jessica Sloan.

Jessica Sloan is the national director and co-founder of #Cut50, a prison reform initiative that has been lobbying to get the First Step Act to President Trump's desk.

When the First Step Act passed in the U.S. House of Representatives back in May, there were several prominent politicians and civil rights organizations who opposed the bill for one reason or another. Some of the major hang-ups were its lack of sentencing reform and how much leeway it gave the Bureau of Prisons to implement these reforms.

"One of our first goals when we went through this legislation was, there was a lot of the word 'may.' The Department of Justice 'may.' The Attorney General 'may.' … So we took that word 'may' and we changed it to 'shall,' which is Congress saying, 'you don't have a choice, you need to implement this,'" Sloan said.

Now the First Step Act now has legitimately broad support, ranging from the Fraternal Order of Police to the ACLU. President Trump and Sen. Cory Booker are rarely on the same team, but Sloan believes this issue is built for compromise.

"There's 60 to 70 million Americans with criminal records. And right now, there's 2.2 million people who are actually incarcerated, and their families out there in the community who are trying to make it day to day, so I think that's the starting point is common pain, right? So once you have common pain, you have some common purpose," Sloan said.

The issue now falls at Senate Majority Leader Mitch McConnell's feet, who's been very skeptical about bringing this bill to the floor.

"Do you think this bill is dead if it doesn't get a doesn't a vote this particular session?" Newsy's Jamal Andress asked.

Sloan responded: "Well, I hate to put that out there in the atmosphere. This thing's going to get a vote. But if it were to have to wait till next year, I think we're going to be seeing a much more difficult legislative environment in the next two years, quite frankly. … So I just don't think that you're going to get a more progressive House and more conservative Senate to agree on a bill next year."

Mitch McConnell is still radio silent on whether he's going to give this bill a chance on the Senate floor, but he's receiving plenty of pressure to do so from columnists, the ACLU and, of course, Jessica Sloan and other members of #Cut50.