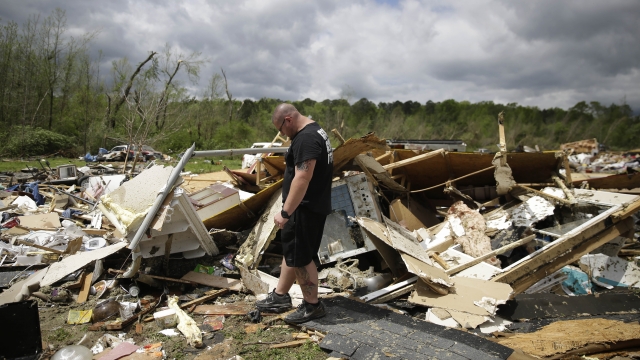 SMS
Tornadoes and COVID-19: First Responders Manage Multiple Disasters
By Amber Strong
By Amber Strong
April 13, 2020
After a natural disaster, the American Red Cross is one of the first on the scene. The pandemic has the organization adopting new safety protocols.
SHOW TRANSCRIPT

While COVID-19 has brought the rest of the world to a screeching halt, Mother Nature hasn’t stopped.

“You could hear it and we knew that it was going to be bad.”

More than 20 people were killed and hundreds of homes were destroyed after tornadoes swept through parts of the south over the weekend.

After a natural disaster, the American Red Cross is one of the first on the scene and this Sunday was no exception. But the coronavirus pandemic has the organization changing the way they do certain things, particularly providing shelter.

“We've instituted new protocol that includes screening at the door of the shelter for temperature checks, and checking for symptoms, and then able to move those with symptoms into an isolation area or room. And then those that are symptom-free would be moved into the shelter.”

But the Red Cross says the goal is to avoid shelters altogether, opting for hotels when possible. They also have to be careful when it comes to handing out food and supplies, too.

“For the distribution supplies we’ll typically move to a more of a fixed point of distribution, where families can drive up, receive that those items and then drive away and limit the amount of exposure to the community between people.”

The Federal Emergency Management Agency, or FEMA, tells Newsy they are also rethinking the shelter process.

The agency has a lot on its plate.  All 50 states have declared major disaster declarations due to the coronavirus; that process goes through FEMA.

And recently, the agency was put in charge of distributing personal protective equipment and other medical supplies during the pandemic.

In 2005, FEMA was heavily criticized for its response to Hurricane Katrina. Newsy asked the agency if they are prepared to handle multiple crises at once.

A spokesperson told us, “ FEMA currently has over 2,900 employees supporting the COVID-19 pandemic response out of more than twenty-thousand five hundred agency employees who are prepared to respond to other emergencies should they occur. Should additional support be needed, FEMA is able to activate the Department of Homeland Security’s surge capacity force composed of federal employees from DHS and other agencies.”

The coronavirus has forced the nation’s first responders to rethink the way they approach disasters. They encourage all Americans to do the same.

“We're really trying to encourage people to take those extra few moments to check their preparedness plan. What has changed since the pandemic started in that plan? Who would you call? Where would you go? What parts of your kit Have you already used at home now that you've been sheltering in place for several weeks, just to take those extra few minutes especially as we get into the height of tornado season. And as flood season really begins.”