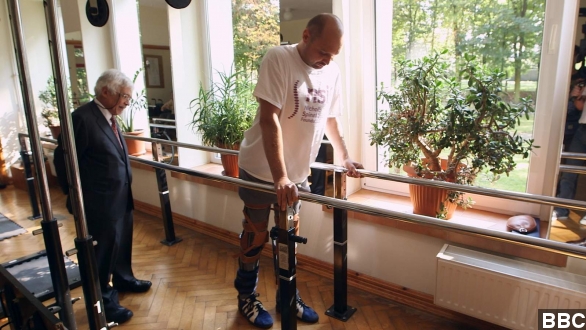 SMS
First-Of-Its-Kind Treatment Gives Man Ability To Walk Again
By Jake Godin
By Jake Godin
October 21, 2014
A medical team has for the first time given a man the ability to walk again after transplanting cells from his brain onto his severed spinal cord.
SHOW TRANSCRIPT

Alright, we're officially in the future. A first-of-its-kind treatment performed by an English-Polish medical team used cells associated with smell to give him the ability to walk again.

Darek Fidyka, seen in this BBC footage, had his spinal cord severed by a knife attack in 2010. But by transplanting olfactory ensheathing cells in the brain and nerve fibers from the ankle, surgeons were able to form a bridge to repair the injury.

It's something which Professor Geoff Raisman of University College London's Institute of Neurology told the BBC is "more impressive than a man walking on the moon."

Fidyka was understandably happy himself, telling the BBC being able to walk again after two years is like being born again.

The Times reports Fidyka can now get around with the help of a frame, drive a car solo and now even hunts with his friends.

Part of the research was funded by the United Kingdom-based Nicholls Spinal Injury Foundation. The organization's founder, David Nicholls, has a son who's paralyzed.

According to The Guardian, he plans to make the research available to other scientists around the world working on cures for paralysis.

The Independent reports that the English-Polish medical team now need to raise about $16 million to fund the same treatment for 10 more patients in Poland to further verify the results.

The treatment was published in the medical journal Cell Transplantation.