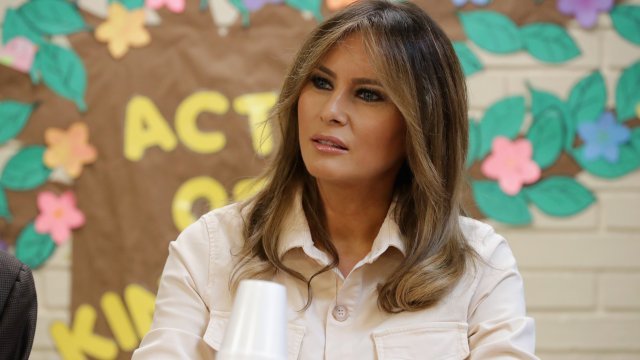 First lady Melania Trump made an impromptu visit to a child detention center in Texas on Thursday. Trump said she wanted to see a facility housing children who have been separated from their parents for herself.

The trip, which reportedly came together within 48 hours, comes the day after the president signed an executive order allowing families to stay together.

The administration's "zero-tolerance" policy led to family separations and sparked intense backlash. Some of that backlash was fueled by images and recordings of young children crying for their parents. The first lady, however, visited a facility with kids aged 12-17.

She asked the kids about how they were doing and where they were from. Federal officials told Trump the children are "usually distraught" when they arrive but eventually calm down.

Many of the approximately 60 kids at the facility arrived at the border alone; the rest were separated from their families.

Trump also asked how she could help "reunite these children with their families as quickly as possible."

Trump has expressed concern for migrant children before. Her spokeswoman told reporters Monday that the first lady "hates to see" families separated.

She reportedly lobbied for President Donald Trump to end separations and plans to tell him about her findings from Thursday's trip.