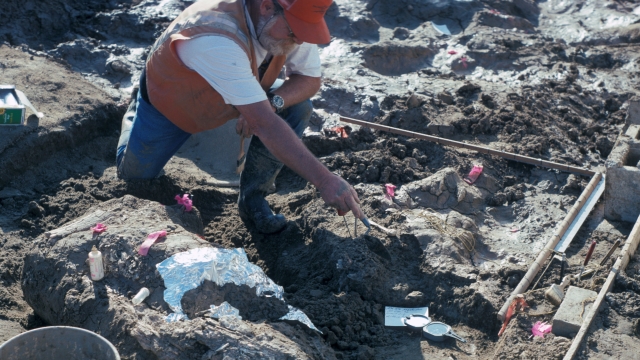 SMS
When Did Humans Get To America? New Find Pushes Debate Back 100k Years
By Evan Thomas
By Evan Thomas
April 26, 2017
Mastodon bones unearthed in California could rewrite our understanding of how and when early humans moved around the planet.
SHOW TRANSCRIPT

Scientists like to argue over when humans first got to the Americas — and the debate might be heating up again. A new study claims early humans were in North America 130,000 years ago — far earlier than any other estimate.

"My first reaction on reading the paper was 'No, this is wrong; something's wrong,'" said John McNabb, an archaeologist at the University of Southampton.

In 1992, construction workers uncovered mastodon bones and nearby rocks buried in a layer of silt. The bones show impacts from hard objects, and the rocks appear to have broken apart from a single larger one. Also, radioactive dating now shows the bones are about 130,000 years old.

The researchers argue the stones might have been used as hammers and anvils to break the bones apart — meaning tool-users could have been spreading across the planet about six times earlier than we thought.

"They're going to think, 'This is crazy; this is outrageous,'" said paleontologist and research author Thomas Deméré.

The prevailing view is no human ancestors were in the Americas until they crossed a land bridge between Asia and Alaska, anywhere from about 13,000 to 22,000 years ago. And every time a new finding like this pops up and revises that arrival date, the debate reignites. 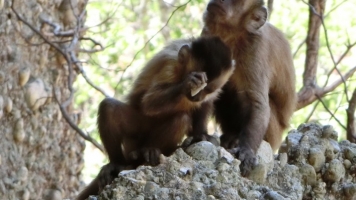 And there's plenty to be skeptical about with this new find. The rocks fit together, but researchers can't say for sure if they were broken apart to be used as tools. There's no evidence nearby of other tools with sharp edges.

But if the dates are accurate, the find has implications not just for humans in America, but also for the whole history of human migration. It means tool-users were all over the planet when modern humans were just leaving Africa.

So the researchers are excited — but they can't be positive yet. They say until someone finds better evidence — like skeletal remains of early humans — we won't know for sure. And if we do find that evidence, you can expect the debate to be fierce.