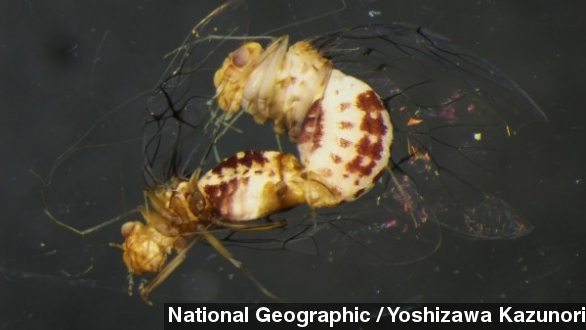 SMS
First Ever 'Female Penis' Discovered In Animal Kingdom
By Laura Heck
By Laura Heck
April 18, 2014
Not only are these newly discovered bugs' sex organs reversed, but they also mate for up to 70 hours.
SHOW TRANSCRIPT

Turns out when it comes to sex for one recently-identified community of insects, the females wear the pants ... and the penises. Yeah, we said it — don't be bashful.

In the vast cave network of Brazil, researchers discovered a new genus of insects, including four new species, that have reverse sex organs. (Via YouTube / Greg Gay)

BBC explains the Neotrogla female has an elaborate, penis-like organ they use to insert into the males' vagina-like opening.

It turns out, gender is defined by the size and type of sex cells, or gametes, each contributes to reproduction. Males give smaller ones and females give larger ones — the eggs. (Via YouTube / Nucleus Medical Media)

The Verge explains that, for these buggers, the female mounts the male and uses her penis-like structure, called a gynosome, to gather sperm and nutrients for her eggs.

The gynosomes are about one-seventh the length of the female's body. LiveScience did some ... interesting math and reported this would be the equivalent of a 5-foot 9-inch man having a 9.8-inch penis, which is, of course, almost double the average size.

So, this is the only known case of such extreme gender reversal in the animal kingdom — but wait. It gets weirder.

National Geographic reports the female is able to grow spiky spines along her gynosome to bind herself to the male. In fact, pairs stuck together so closely that researchers accidently tore one male apart when they tried to separate the mates.

And what's more: The female can latch onto the male for up to 70 hours. That's some extreme lovemaking. (Via Slate)

The study was published in Current Biology and outlines the role evolution played in the insects' sex lives.

Food is scarce in the caves where these bugs live, so sperm offers nutrients for the competitive female and her eggs, reports Discover Magazine.

Researchers are planning to use genomic data from the bugs to try to determine when the female penis evolved in these bugs.