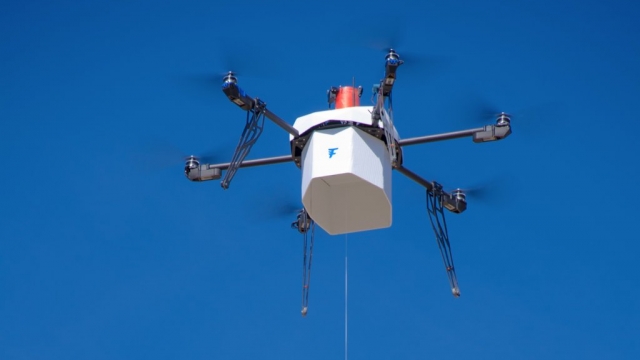 Ladies and gentleman, we're one step closer to having drone-delivered pizza pop up right on our doorsteps. Maybe.

For the first time ever, a completely autonomous drone made a federally approved delivery in an urban area. The company, Flirtey, says the drone flew about half a mile and delivered bottled water, food and a first-aid kit to a vacant home in Nevada. Sounds like everything I'd need for a night in.

This urban delivery is a big deal because it's one step closer to proving drones can successfully move around buildings and power lines and drop off packages safely.

Flirtey's CEO, Matt Sweeney, told Fortune, "We think the safest way to deliver packages is for the drone to remain at a distance and lower it into the customer's hand."

The Federal Aviation Administration is just testing the waters here. Bigger companies like Amazon and Google still haven't been allowed to test similar deliveries, and getting approval from the agency is apparently a pretty lengthy process.

Flirtey says it was able to snag approval from the FAA only because of its previous tests in Australia and New Zealand. So it looks like getting that late-night drone-delivered toilet paper still may be a few years away.