History Made: Cambodian-American Woman Elected To US Public Office 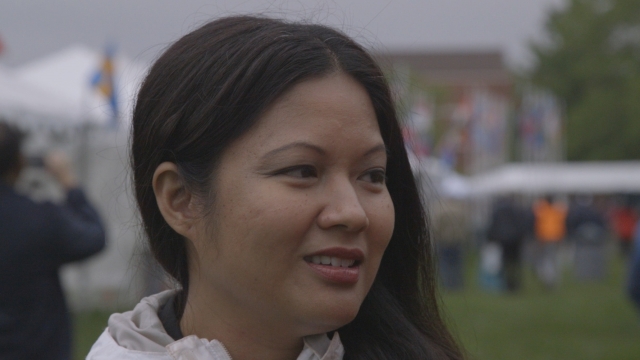 SMS
History Made: Cambodian-American Woman Elected To US Public Office

By Melissa Prax
May 22, 2017
Former refugee Khem Khoeun was elected as a park district commissioner in Skokie, Illinois.
SHOW TRANSCRIPT

Khem Khoeun just made history. She's the first Cambodian-American woman to get elected to a public office in the U.S.

"I didn't think about that when I decided to run," Khoeun says. "It was kind of like a personal decision trying to figure out whether or not it would make sense for me in this particular time of my life. It wasn't [until] after I won that I really felt the impact of what had just happened."

Khoeun won the election to become a park district commissioner in Skokie, Illinois.

But she's already had an impact beyond Skokie. Khoeun has received calls from women around the country who want to run for office in their local communities.

"I wish I could say you break the barriers, you break this glass ceiling, whatever you want to call it, and life gets easier. It doesn't. It's something that we embrace as a woman trying to wear multiple hats," she says.

Khoeun is a former refugee who has held various positions in her community. But what really inspired her to run for the park district was her kids.

"I was still on the fence because I felt disillusioned. I was like: 'What's the point? This is just a park district — why get involved at all? There's so much else going on in this world right now and in this country.' … Then I realized my choices impact my children, and I have to be the person to offer that alternative and to make sure that they have a safe place," Khoeun says.

Khoeun is part of a diverse community. But she wants to challenge women everywhere to feel empowered.

"I think one of my pet peeves, though, is when people tell me, 'But you're different, but you're strong, I'm not like you.' And those are things that I always call them out on. … It's an easy way out — it's an easy way to not rise to the occasion or not challenge yourself to do more," Khoeun says.