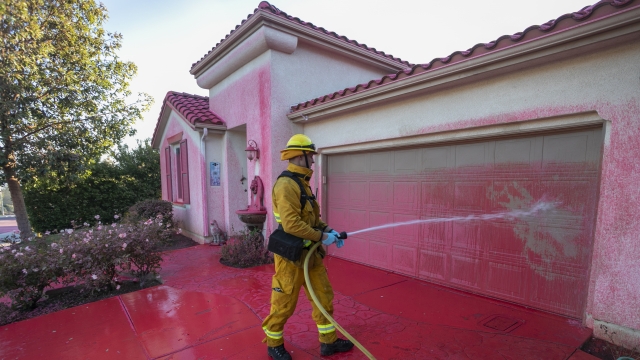 SMS
In Flames Again, California Is Rethinking Home Building In Wild Lands
By Peter Hecht
By Peter Hecht
October 31, 2019
With major fires burning across the state, California is reckoning with its population boom that has spiked home construction in fire-prone areas.
SHOW TRANSCRIPT

"This is a challenging time ... We're experiencing at or near historic wind events, and that precipitated in a statewide emergency declaration,” California Gov. Gavin Newsom said.

California is on fire — again. Major blazes are burning in Los Angeles and surrounding counties and in several locations in Northern California. And the Golden State is again assessing its ever-increasing fire risk.

Since 2017, California has suffered six of the 10 most destructive wildfires in its history — and the two worst. One of the reasons is a population boom that dramatically accelerated home construction in high fire risk areas.

According to U.S. Forest Service data, residential construction increased by 34 percent in fire-prone grasslands or woodlands between 1990 and 2010, as California's population increased by more than 8 million people.

To that, you can add in these dangers: conditions worsened by drought and climate change. A study in the scientific journal Earth's Future says California's warm season days now average 2.5 degrees hotter than in the early 1970s.

CalFire officials generally used to refer to the fire season as a late spring to early fall event. Now it's considered to be year-round. And when powerful winds kick up, as they did this week, the danger explodes.

"Everything is tenfold, so what would normally take one engine to handle, like a small spot fire on the side of the road, now takes 10 engines."

Last year, the deadliest fire in state history, the Camp Fire, killed 85 people and destroyed nearly 19,000 structures in the town of Paradise. And Californians are increasingly wary of the perils.

In a recent poll, three-fourths of California voters surveyed supported restrictions to stop housing construction near flammable woods and grasslands.

In 2011, California lawmakers approved a controversial fire tax that imposed an annual levy on homeowners in areas most likely to incur firefighting costs. Still, wildfires in 2017 and 2018 caused damages estimated at $21.5 billion.

Gov. Newsom has ordered a massive effort to dispatch brush clearing and chainsaw crews to clear out half a million acres of vegetation a year to reduce community fire dangers.

But Char Miller, an environmental analyst at Pomona College, says California continues to ignore a major source of fuel: housing being built in fire-prone areas. He says the state can no longer "proclaim ignorance or innocence" about the dangers.