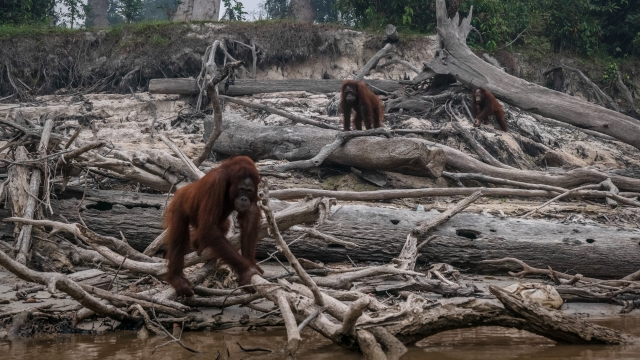 Wildfires are burning across vast forests in Indonesia, echoing blazes that have scorched Brazil's Amazon rainforest and triggering new concerns over climate change.

As in Brazil, a significant number of the Indonesian fires are believed to be deliberately set to clear forests for agricultural production.

Indonesia has a thriving palm oil industry. Now, in its worst fire season since 2015, hundreds of wildfires have scorched more than 800,000 acres. And government officials say most were set to clear space for palm plantations – a lucrative industry that has been toppling forests on Indonesia's Sumatra and Borneo islands and elsewhere.

Officials say the fires are impacting endangered species of orangutan, with animals uprooted by flames or smoke.

Indonesian authorities say they have arrested nearly 200 people for investigation of illegal burning. A police spokesman said, "Indonesian Police will enforce the law against anyone who is proven to have carried out forest and land burning, whether it was done intentionally or through negligence."

Additionally, with nearly 3,000 fires reported throughout Indonesia and its islands, the government says it's investigating land practices of international corporations as adding to the crisis. Officials say they shut down plantations run by companies from Malaysia and Singapore as a result of about two dozen suspicious fires on their properties.

The Indonesian government in 2011 created a sustainable production plan for palm oil. It set conditions to address environmental impacts, including revoking licenses for parcels with unauthorized burning.

But a spokesman for Indonesia's disaster management agency says that hasn't stopped slash-and-burn agriculture. He said: “That’s how they clear the land, using the cheapest method."

Indonesia's cities are choked with smoke, and more than 150,000 people have been treated for respiratory ailments. In addition to concerns over forestry practices of foreign corporations, the smoke is heightening diplomatic tensions with neighboring countries as Singapore and Malaysia complain about unhealthy air.

Malaysia's environmental minister told reporters that a diplomatic appeal would be sent to Indonesia, demanding more action to put out the fires.

More than 9,000 Indonesian firefighters are battling the blazes. And President Joko Widodo says the government will seed clouds and that he will personally pray for rain.