Caldor Fire Closes In On Tahoe 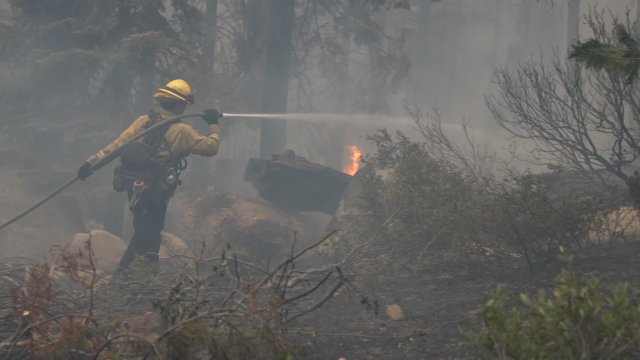 SMS
Caldor Fire Closes In On Tahoe
By Jason Bellini
By Jason Bellini
September 1, 2021
A red flag warning for dry, windy conditions remains in effect until 11 p.m. today. More than 50,000 people remain evacuated throughout the region.

Favorable weather helped firefighters trying to save communities on the south end of Lake Tahoe from an approaching wildfire, but officials warned Wednesday that stiff winds and dry conditions mean that homes in the California-Nevada alpine region are still in danger.

“We lucked out a little bit yesterday with some of the winds that didn’t come up quite as hard as we expected them to," Tim Ernst, an operations section chief for the California Department of Forestry and Fire Protection, told firefighters in a briefing. “We were fortunate the fire did not make as strong a push into Tahoe as it did the previous day."

The Caldor Fire remained roughly 3 miles (5 kilometers) south of the recently evacuated city of South Lake Tahoe, moving northeast toward the California-Nevada state line, said Henry Herrera, a battalion chief for the agency, which is also known as Cal Fire.

Crews tried desperately to keep flames away from urban communities, where houses are close together and shopping centers, hotels and other structures would provide even more fuel for a fire that so far has been feeding on trees, grasses and scattered homes and cabins.

“We’re still not out of the woods. The fire is still moving,” he said.

The fire has been burning toward Lake Tahoe from the southwest along California Highway 50, climbing over a Sierra Nevada summit and descending into the Tahoe Basin.

Thick smoke has enveloped the city of South Lake Tahoe, which is all but deserted at a time when it would normally be swarming with tourists. On Monday, roughly 22,000 residents and thousands of others from neighboring communities jammed the city’s main artery for hours after they were ordered to leave.