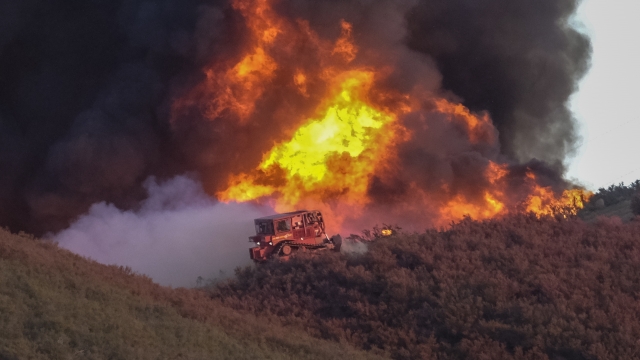 Firefighters battling a Southern California wildfire were pulled back at times to find rest and shade on Thursday, a day after seven were sent to the hospital in the midst of a grueling heat wave.

"There's no stand-down work order but they're really pacing the work," with some firefighters able to take 20-minute breaks and find shade back of the fire line before returning to the job of stamping out hot spots, Kelliher-Berkoh said.

Firefighters are "industrial athletes" who might be hauling up to 50 pounds of gear in addition to their boots, clothing and helmets, and keeping them safe is a priority, especially as they work in steep terrain in extreme heat, Kelliher-Berkoh said.

No one suffered heat exhaustion on Friday so "the strategy seems to be working," she said.

The blaze in Castaic was 27% contained Thursday night.

Progress also was made on a fire in eastern San Diego County near the U.S.-Mexico border that left two people hospitalized with critical second- and third-degree burns, the California Department of Forestry and Fire Protection said.

The victims were burned after apparently crossing the border, and five other people had to be rescued, Tony Mecham, Cal Fire unit chief in San Diego County, said at a news conference.

"Those people ran for their lives," he said. ""They had a very close call."

The blaze also destroyed three homes and seven other buildings.

"It wiped everything out, the only thing I have left is the clothes on my back, so far I saved one of my dogs and two of the cats," Ronnie Fukuda, who lost his home in the community of Potrero, told KSWB-TV.

The Border 32 Fire in the Dulzura area grew to nearly 7 square miles on Wednesday and prompting evacuation orders for about 1,500 people in hundreds of residences. However, the fire had stalled on Thursday. It was 14% contained and some people were allowed to return home, fire officials said.

The fires erupted as California broiled under a heat wave that was expected to last through Labor Day, sparking concerns about the threat of new blazes in tinder-dry brush. Triple-digit forecasts also prompted worries about straining the state's electrical grid as people turned to their air conditioners. The California Independent System Operator, which oversees the grid, issued a "Flex Alert" call for voluntary conservation between 4 p.m. and 9 p.m. Friday — the third alert in a row.

At the Route Fire in Castaic, seven firefighters were sent to the hospital on Wednesday with heat-related problems before being released. Temperatures remained torrid on Friday, topping out at 112 degrees in Castaic.

However, about 400 firefighters aided by aircraft managed to quell the explosive growth of the blaze, which had scorched more than 8 square miles and destroyed a house. No homes remained threatened and evacuations were lifted, fire officials said.

The fire closed Interstate 5, a major north-south route but some lanes had reopened, although the highway remained jammed, especially by big-rigs.

Wildfires have sprung up this summer throughout the Western states. The largest and deadliest blaze in California so far this year erupted in July in Siskiyou County. It killed four people and destroyed much of the small community of Klamath River.

Scientists say climate change has made the West warmer and drier over the last three decades and will continue to make weather more extreme and wildfires more frequent and destructive.