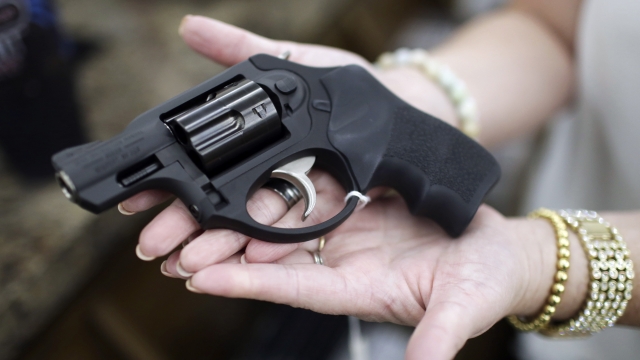 Gun violence prevention groups and a gun rights group are encouraging firearm safety while adults and children are stuck at home due to COVID-19.

With gun stores reporting an uptick in firearm and ammo sales, gun violence prevention groups and gun rights groups are aligned in their messaging: at-home gun safety can save lives during the coronavirus.

Laura Cutilletta, Managing Director at the Giffords Law Center: "Roughly half of gun owners report that they store at least one of their firearms unlocked in their home. And there are estimates that show that about 4.6 million children are living in homes with guns that are not stored safely."

Laura Cutilletta is the Managing Director at the Giffords Law Center. According to Giffords, a gun violence prevention group, "between 70 and 90% of guns used in youth suicides, unintentional shootings among children, and school shootings perpetrated by shooters under the age of 18 are acquired from the home or the homes of relatives or friends."

With that in mind, some believe the chances of a child being harmed by gunfire could increase while schools are closed and more kids are spending time at home.

Giffords along with campaigns from gun reform groups like Brady and Moms Demand and gun rights group the National Shooting Sports Foundation have all encouraged gun safety, especially safe storage, during the pandemic.

Cutilletta: "Children tend to know where guns are stored. In the home, even when parents think that they don't know … They're very curious. They play with guns, they show their friends."

Bill Brassard, Senior Communications Director at the NSSF: "We're seeing a lot of parents become educators now right there. They're teaching their kids at home and we have encouraged them to include in their teaching time a discussion about firearm safety, and to stop, don't touch, get away, tell an adult and also to respect the rules of the house related to gun safety."

And it's not just small children in focus: firearm suicides make up the bulk of gun deaths — more than 61% in 2018 — and easy access to a firearm could be dangerous for anyone.

Brassard: "The experts tell us that the act of suicide is often impulsive, and that people make a decision to harm themselves and 10 minutes or less if the method of suicide, like a firearm, cannot be accessed at that time of acute risk."

Cutilletta: "There is a big problem with teen suicide in our country and having a firearm accessible is making it much, much more dangerous because suicide attempts will likely result in death."

For gun owners, there are some basics to keep in mind: 1) keep the muzzle pointed in a safe direction, 2) keep your finger off the trigger until you're ready to fire and 3) treat every gun like it's loaded.

Brassard: "Safe storage is basic to firearms ownership. It's the most important responsibility of every gun owner to make sure their guns don't fall into the wrong hands by securely storing them."