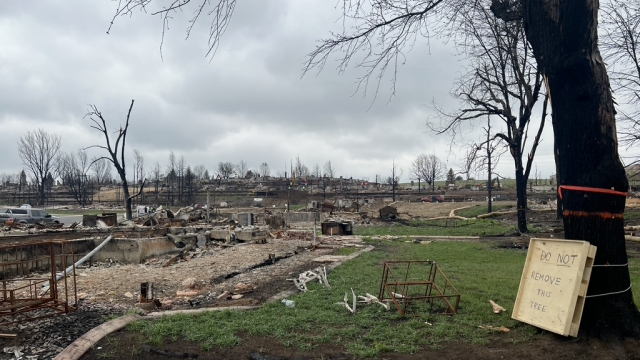 SMS
Underinsured Homeowners Struggle To Rebuild After Boulder Wildfires
By Maritsa Georgiou
By Maritsa Georgiou
June 13, 2022
As two women figure out life after a fire, they hope their loss encourages others to do their own digging into insurance before it's too late.

Every day Janet Jensen-Wolf goes back to her Louisville, Colorado neighborhood to sift through what a late December wildfire left behind.

"It's not just a home. It was a life that I had before I was born, when I was born and everything after it. And it's all in one spot," she said. "Now it's all gone. And it's tough to leave it."

She digs for anything from her life before the fire.

"I have a memory of what it looked like, you know, and I feel like I can go in there," she said. "But I come here, and I can't. It's gone. It's all in ash or debris. And that's the tough part. The rest, I can handle. But that keeps going in my mind that, 'God, I can go and go upstairs and I can grab this or I can grab that.' And then I come here and I know I can't."

You can see how fast the fire overtook Jensen-Wolf's home in her photos, first timestamped at 3:42. Within six minutes, most of the front of her house was in flames and within 10 minutes it was fully engulfed.

It's overwhelming to see all that's left of a life after a fire and wonder where to even begin. Then, imagine hearing you don't have enough insurance coverage to even rebuild your home.

That's exactly what happened to Jerolyn Ochs, who lived three doors down from Jensen-Wolf.

"I just knew it was gone," she said. "I mean, the fact that my husband and I got out is no small miracle."

She and a majority of her neighbors had insurance policies that won't cover the amount it will take to rebuild. It was another surprise after the unexpected December 30 fires destroyed more than 1,000 homes.

NEWSY'S MARITSA GEORGIOU: Did you have any idea you were underinsured?

JEROLYN OCHS: Oh, God, no. Most people are underinsured. Unless you're that unicorn and there's not a lot of unicorns in this insurance piece of it.

Jensen-Wolf is one of those unicorns. She's one of the estimated 8% of victims in the fire that had full replacement coverage.

What wasn't covered for Jensen-Wolf — and many other families — was the stuff inside. Antiques, tools from her dad, memories from her kids. But she knows she's luckier than many of her neighbors.

"They're underwater," she said. "And there's some families that are just selling their lot. That's up for sale, and they're walking away."

Ochs' home of 18 years was paid off and newly remodeled. But now?

"We are in the first draft process with our architects," Ochs said. "So that's kind of a dot, dot, dot. We're anticipating that we're probably going to need another three or four hundred thousand dollars, which is really hard when you're — we were really putting it aside and saving up for retirement."

The Colordao Division of Insurance wanted to know the scope of the underinsured problem, so they analyzed the insurance claims.

"We want to try and really get some good data on this," Vince Plymell said. "It was surprising. I mean, the the numbers are large. And and I think it just points to the fact that it's causing concern for so many people. And the challenge is, you know, what do we do to address this?"

Just how many homeowners in the fire didn't have enough coverage? It's anywhere from 36% to 67% of those filing claims.

The range depends on the cost per square foot to rebuild, which varies wildly day by day. Combine that with a booming real estate market, and an increased wildfire threat, and making sure you have enough coverage at any given moment becomes very complicated.

"So one of the things that we're really exploring is, what can we do to offer more transparency, more information to people we were exploring?" Plymell said. "What can we do to make that to get insurance companies to give people better information so that they can make more informed decisions? Because our concern now is that they're not necessarily they don't have all the information to make good choices. So that's one element of something that i think is going to be very important."

"I don't remember our agent ever saying, 'Hey, let's have a sit down. Let's go through your policy. Let's see how your insurance is. Let's see if you've got the right amount of insurance in the event of a catastrophe,'" Ochs said.

Some insurance agents say it's about finding balance to make sure you're covered without breaking the bank. It can be a challenge and sometimes, your geographic location makes it impossible.

"We've had those coverages where you, if you're in a high-wildfire area, around the difficult area to insure, you might not be able to get your full amount because carriers will limit their exposure," said Scott Welch, president of The Insurance Nerds at DL Williams Insurance.

Plymell encourages people to treat home policies like your health insurance — Revisit your coverage at least once a year. Don't wait for your agent to reach out to you.

"We're telling people to ask questions, find out what you have in terms of your policy limits, what's covered, what's not covered, if you don't understand something, ask questions. If you don't, you're not getting good information," Plymell said. "Turn to your department of insurance or here in Colorado, the Division of Insurance. Every state has a department or division of insurance that regulates insurance in that state."

These are just two stories out of a thousand.

"People have moved on," she continued. "That's more of the tragedy is, life moves on and we're now still at December 30. Our life stopped. Our life changed."

As Jensen-Wolf and Ochs figure out what's next, they hope their loss encourages others to do their own digging before it's too late.

"I see my neighbors and what they're going through. It's like, oh my gosh, I wish people would know what I knew," Jensen-Wolf said. "And now I tell people when we talk about this, 'Go check your insurance. Go get replacement.'"