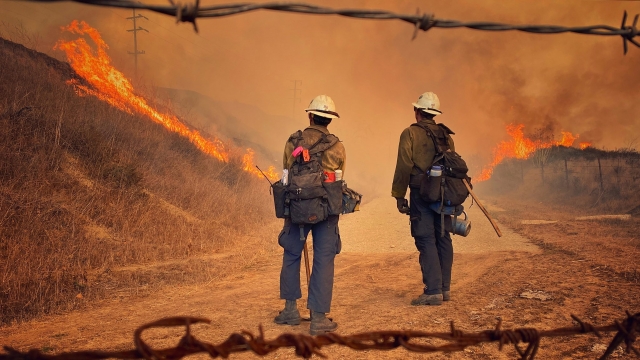 A major highway in Southern California coastal mountains remained closed Wednesday and evacuation orders were in place as a growing wildfire chewed through dry vegetation in the region.

More than 760 firefighters battled the Alisal Fire, which covered 21 square miles along the south Santa Barbara County coast and was only 5% contained, county fire officials said.

The fire was burning near Rancho del Cielo, which was once owned by Ronald and Nancy Reagan and was known as the Western White House during his presidency. Fire crews were protecting the ranch where Reagan hosted world leaders.

The fire erupted Monday on a ridge and swept toward the ocean, forcing the closure of U.S. 101, the only major highway on that section of the coast. Evacuation orders and warnings were in place for ranches and several rural communities.

While the area is lightly populated, the blaze burning in dense chaparral threatened more than 100 homes, ranches and other buildings, fire officials said.

The Santa Barbara County Board of Supervisors declared a local emergency on Tuesday and asked Gov. Gavin Newsom to declare a state of emergency to free up more state resources for firefighters and evacuees.