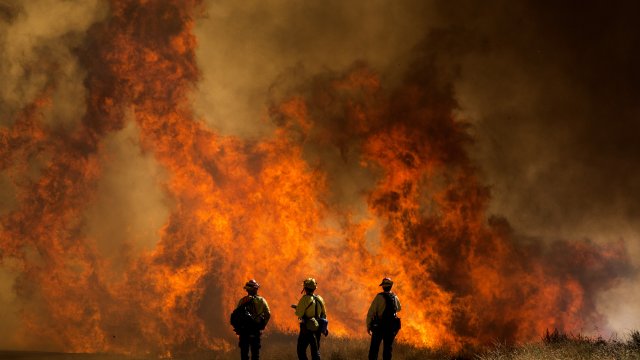 A wildfire east of Los Angeles is forcing thousands of people to evacuate, and firefighters are struggling to contain it.

The Apple Fire began Friday night in Cherry Valley, California, and now 7,800 people are displaced. As of Sunday, it had burned over 20,000 acres, and Sunday morning the San Bernardino National Forest Service said it had zero percent containment.

Crews used helicopters, air tankers, group equipment and hand crews to try to slow its spread. The Forest Service says much of the fire is in steep, rugged hillsides that have no access for firefighting vehicles. The hot and humid weather have also made it more difficult to contain.

Three buildings have been destroyed by the fire, but no injuries have been reported. The cause of the fire is still under investigation.