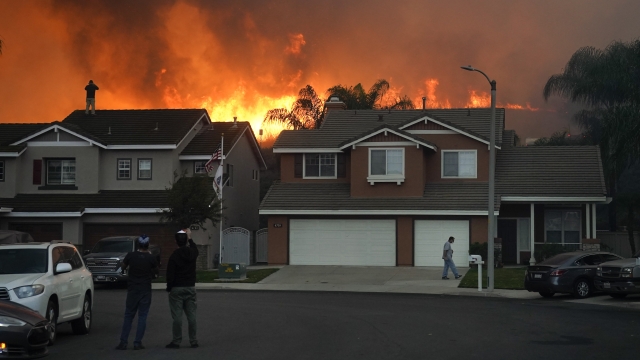 Two major brush fires continued to burn near heavily populated communities in Southern California on Wednesday. But diminishing winds were helping fire crews save homes after more than 100,000 residents were forced to flee starting Monday.

By Wednesday, seven homes or structures in neighborhoods like this one had burned and one was totally destroyed. The toll could have been far worse from the Blue Ridge Fire in Orange and San Bernardino counties. The fire had threatened subdivisions in five different communities.

The blaze had burned nearly 15,000 acres and was still only about 1/5th contained by late Wednesday.

Nearby, the Silverado Fire in Orange County is only about 1/4th contained. It's burned more than 20 square miles, but no homes have been destroyed. Yet two firefighters were hospitalized for severe burns suffered Monday.

A major electrical utility, Southern California Edison, announced that it is investigating whether one of its lines may have ignited the Silverado Fire, near the city of Irvine.