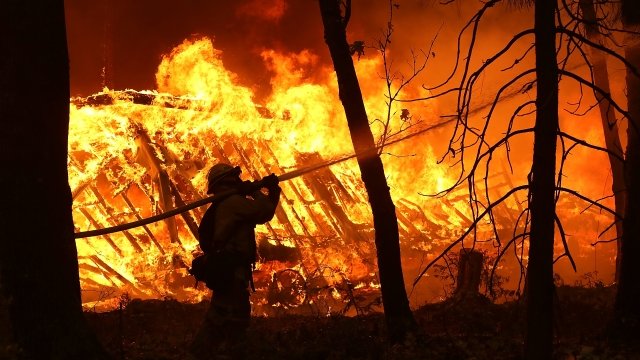 By Katherine Biek
November 19, 2018
As of late Sunday, the Camp Fire, which is the deadliest wildfire in California history, is 65 percent contained.
SHOW TRANSCRIPT

Survivors of the deadliest wildfire in California history gathered together Sunday to hold a vigil for victims in the town of Paradise.

So far, the Camp Fire has killed 77 people, scorched at least 150,000 acres and destroyed more than 13,000 structures. As of Sunday night, fire crews have it 65 percent contained.

Firefighters are also battling the Woolsey Fire at the other end of the state. So far, it's burned more than 96,000 acres and killed three people — bringing the statewide death toll from the fires up to 80.

Up until now, both blazes have been fueled at least partly by high winds and dry conditions, but meteorologists say rain is finally in the forecast later this week.

But the predicted downpours are reportedly a double-edged sword. The water should help douse the flames, but it's also supposed to bring gusty winds that could make fire behavior erratic.

The rain could also slow down the search for more victims of the two wildfires, by washing away evidence like bone fragments.

Just for the area hit by the Camp Fire, almost 1,000 people are still unaccounted for. Though officials have cautioned that some of the names on their list could be people who evacuated and are staying in areas where the cell service is down.