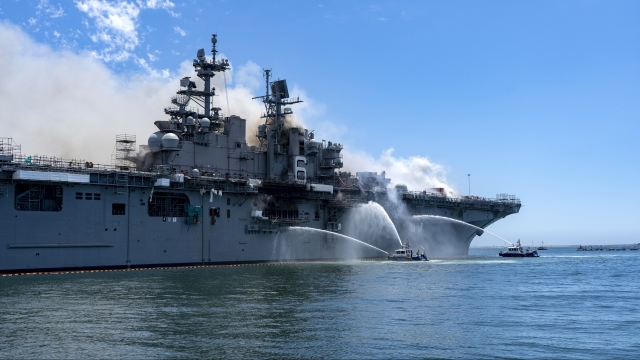 Fire crews are still battling a blaze that broke out aboard a U.S. Navy ship Sunday morning.

Navy officials said 160 sailors were on board the USS Bonhomme Richard when the fire started. The ship was docked at Naval Base San Diego in California where it's been undergoing maintenance.

The fire and an internal explosion caused non-life threatening injuries to 17 sailors and four civilians. As of early Monday morning, just five sailors remained in local hospitals for observation. All were reported to be in stable condition.

The cause of the fire is under investigation, but the Navy believes it started in a cargo hold area for marine equipment and vehicles.

The USS Bonhomme Richard is an amphibious assault vessel. The ship, which can usually carries thousands of sailors and Marines, returned to the U.S. in 2018 after a six-year stint in Japan as part of the 7th Fleet's expeditionary strike group. Since then, the ship has been undergoing almost $250 million worth of upgrades and refurbishments.

San Diego's fire chief told CNN it could take several days for the fire on the ship to be completely put out.